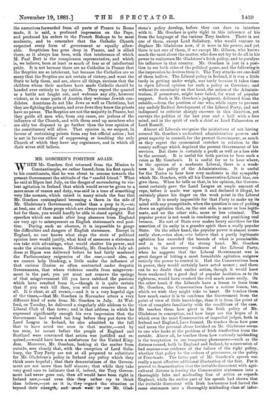 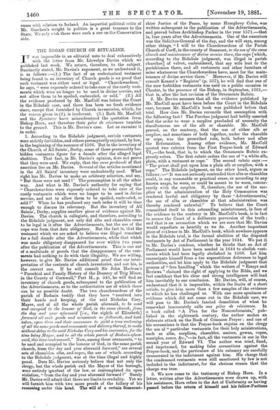 WHEN Mr. Goschen first returned from the Mission to Constantinople, we rather feared, from his first speech to his constituents, that he was about to assume towards the present Government the attitude of the "candid friend." What he said at Ripon last July, on the danger of surrendering to vio- lent agitation in Ireland that which would never be given to a mere sense of reason and duty, was said in a tone of something very like menace, which raised in many minds the fear that Mr. Goschen contemplated becoming a thorn in the side of Mr. Gladstone's Government, rather than a prop to it,—or, at best, one of those props which are always reminding you that but for them, you would hardly be able to stand upright; But speeches which are made after long absences from England are very apt to misrepresent an English statesman's real posi- tion. During such an absence, it is impossible to gauge the difficulties and dangers of English statesmen. Except in England, no one knows what steps the state of political opinion here would justify, what kind of measures a statesman can take with advantage, what would shatter his power, and make the situation worse. Evidently, Mr. Goschen's July ad- dress at Ripon was delivered before he had fairly mastered the Parliamentary exigencies of the case,—and also, as we cannot help thinking, a little under the influence of that curious illusion so often contracted under despotic Governments, that where violence results from misgovern- ment in the past, you yet must not remove the springs of that misgovernment till you have subdued the passions which have resulted from it,—though it is quite certain that if you wait till then, you will not remove them at all. It is clear, at all events,—and it is a very hopeful sign of the times,—that Mr. Goschen in November utters a very different kind of note from Mr. Goschen in July. At Wat- ford, on Tuesday, he delivered a singularly able address to the Liberal Club of that town ; and in that address, in which he expressed significantly enough his own impression that the Government had waited too long before they put down the Land League in Ireland, he also admitted to the full that to have acted. too soon in that matter,—and by too soon, he meant before the people of England and Scotland were convinced that action was justified and re- quired,—would have been a misfortune for the United King- dom. Moreover, Mr. Goschen, looking at the matter from outside, sees clearly that, with the exception of Lord Salis- bury, the Tory Party are not at all prepared to substitute for Mr. Gladstone's policy in Ireland any policy which they think more hopeful ; that their denunciations of the Govern- ment are not more than half sincere ; that while they take very good care to intimate that if, indeed, the Tory Govern- ment had never gone -out, then all would have been right in Ireland now,—and even this - they rather try to think than believe,—yet- as- it is,- they regard the. situation as beyond their strengisit,- and--must, wait: UP-- see, Mr. Glad+

stone's policy develop, before they can dare to interfere with it. Mr. Goschen is quite right in this inference of his from the language of the various Tory leaders. There is not one of them, except Lord Salisbury, who would venture to displace Mr. Gladstone now, if it were in his power, and yet, there is not one of them, if we except Mr. Gibson, who knows much the most about the matter, who does not try to do all in his power to embarrass Mr. Gladstone's Irish policy, and to paralyse his influence in that country. Mr. Goschen is just in a posi- tion to see both sides of the political game, and the following is the impression he derives from it. The Tory attacks are one-half of them hollow. The Liberal policy in Ireland, if it was a little tardy in getting under weigh, was tardy because it takes time to ripen Liberal opinion for such a policy as Coercion ; and without its unanimity on that head, the action of the Adminis- tration, if premature, might have failed, for want of popular support. Such is Mr. Goschen's judgment, delivered from the outside,—from the position of one who, while eager to prevent any unduly Radical development of the Liberal Party, and not indisposed to criticise sharply excesses in this direction, yet surveys the politics of the last year and a half with a free mind, and in the spirit of such a chief as Lord Palmerston or Lord Russell.

Almost all Liberals recognise the misfortune of not having secured Mr. Goschen's undoubted administrative powers and great sagacity in council, for the present Government, as much

services. But there is certainly a profit as well as a loss side to the account. It is useful for both parties to hear such a voice as Mr. Goschen's. It is useful for us to hear where, in the opinion of a moderate Liberal, there is a weak- ness in the policy of the Administration. It is useful for the Tories to hear how very moderate is the sympathy which Mr. Goschen, with all his Conservative-Liberal bias, can give them. When he tells us that, in his opinion, the Govern- ment certainly gave the Land League an ample amount of rope, before it made war upon it and declared it illegal, he certainly places his finger on the weak point in the Liberal Party. It is nearly impossible for that Party to make up its mind with any promptitude, when the question is one of putting

down an agitation that, on the one side, is more or less legiti. mate, and on the other side, more or less criminal. The popular power is not weak in condemning and punishing real

treason. No sort of State ever makes heavy sacrifices for the assertion of its unity in a grander spirit than a really popular State. On the other hand, the popular power is almost neces- sarily slow,—too slow, —to believe that a partly legitimate agitation has exceeded the bounds of what is permissible, and is in need of the strong hand. Mr. Goschen points to the necessary weakness of the Liberal Party, when he suggests that the Liberal Government was in great danger of letting a most formidable agitation outgrow entirely the power to control it. Had the Conservatives been in power, they would certainly have acted sooner ; and there can be no doubt that earlier action, though it would have been weakened by a good deal of popular hesitation as to its rightness, would have crushed the evil much more easily. On the other hand. if the Liberals have a lesson to learn from Mr. Goschen, the Conservatives have a serious lesson, too, which we wish they might take to heart. He teaches them how much easier it is to condemn the Government from the point of view of little knowledge, than it is from the point of view of complete familiarity with the conditions of the case.

He teaches them how great is the Irish policy of Mr. Gladstone in conception, and how large are the hopes of it

which even the most Conservative of impartial judges, both in

Ireland and England, have formed. He teaches them how poor and mean the personal abuse lavished on Mr. Gladstone seems

to one who looks at the problem of Irish disaffection from the outside. Above all, he teaches them how curiously misleaditqg is the temptation to use temporary phenomena—such as the distress caused, both in England and Ireland, by a succession of bad seasons—as evidence of the failure of the right policy, whether that policy be the redress of grievances, or the policy of Free-trade. The latter part of Mr. Goschen's speech was

really a most effective additional illustration of the first. For it proved to demonstration that the irritable discontent with agri-

cultural distress is forcing the Conservative statesmen into a thoroughly false and misleading line of action as regards England, while the earlier part of his speech bad shown that

the irritable discontent with Irish lawlessness had forced the same statesmen into a. thoroughly taieleading clam of infer-

ences with relation to Ireland. An impartial political critic of Mr. Goschen's weight in politics is a great treasure to the State. We only wish there were such a one on the Conservative side.