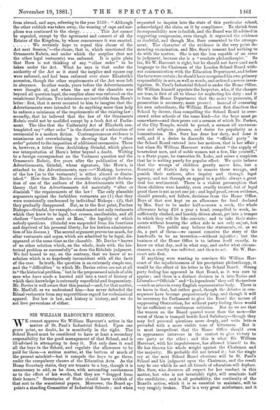 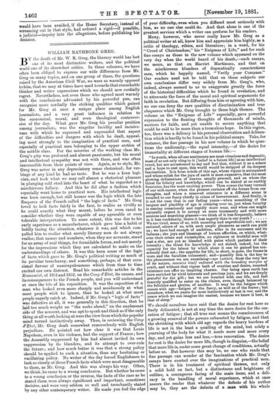 WE cannot approve Sir William Harcourt's action in the matter of St. Paul's Industrial School. Upon one grave point, no doubt, he is manifestly in the right. The School Board must be considered to have at least a secondary responsibility for the good management of that School, and is ill-advised in attempting to deny it.. Not only does it send all the boys in the School, and regulate the allowance to be paid for them—a serious matter, at the bottom of much of the present mischief—but it compels the boys to go there, under the compulsory clauses of the Education Acts. As the Home Secretary states, they are truants to a boy, though it is unnecessary to add, as he does, with astounding carelessness as to the effect of his words, that they are " dragged from their homes." Secretaries of State should leave rubbish of that sort to the sensational papers. Moreover, the Board ap- points a standing Committee of Industrial Schools ; and when

requested to inquire into the state of this particular school, acknowledged the claim on it by compliance. To shrink from its responsibility now is foolish, and the Board was ill-advised in suggesting compromise, even though it regarded the evidence as doubtful, and though Mrs. Burr consented to the arrange- ment. The character of the evidence is the very point de- manding examination, and Mrs. Surr's consent had nothing to

do with the matter. She is not the less capable of an error in judgment, because she is a " resolute philanthropist." So far, Sir W. Harcourt is right, but he should not have used such language to the Chairman of the London School Board with- out communication with the Education Department, and before the facts were certain; he should have recognised his own primary responsibility in acts, as well as words, and ordered a severe inves- tigation. St. Paul's Industrial School is under the Home Office. Sir William himself appoints the Inspector, who, if the charges are true, is first of all to blame for neglecting his duty ; and it is from the Home Department that the order to prosecute, if prosecution is necessary, must proceed. Instead of censuring his own subordinate, Sir William Harcourt first dissolves the School by decree, thus compelling the School Board to over- crowd other schools of the same kind—for the boys must go somewhere—and then pours out a sermon of which Dr. Parker, of the City Temple, would be proud, a sermon all unctuous- ness and religious phrases, and desire for popularity as a humanitarian. Mrs. Surr has done her duty, and done it well, and if a desire to discredit the " official party " in the School Board entered into her motives, that is her affair ; but when Sir William Harcourt writes about " the supply of benevolent men, and of noble women not a few, like yourself," in a State paper, he travesties St. Luke, and raises a suspicion that he is writing purely for popular effect. We quite believe that the wrongs of children greatly move him, but a Secretary of State's duty is to remove those wrongs, and punish their authors, after inquiry and through legal agency, and not through an appeal to a public always a great deal too sentimental. There is a violent presumption that these children were harshly, even cruelly treated, but of legal proof there is not as yet one jot ; and legal proof, sworn evidences should precede, not follow, decisions from the Home Office. Boys of that sort kept on an allowance for food declared by Mrs. Surr to be under half-a-crown a week, the whole allowance being £16 a year a head, compelled to work, in- sufficiently clothed, and harshly driven about, get into a temper in which they will lie like convicts ; and to take their state- ments without hearing the other side is not only unjust, but absurd. The public may believe the statements, or, as we do, a part of them—we cannot conceive the story of the handcuffs to be an invention—without injustice ; but the business of the Home Office is to inform itself exactly, to know on what day, and in what way, and under what circum- stances, a cruelty was inflicted, and then to act. Sir W. Har- court acts first.

If anything were wanting to convince Sir William Har- court of the injudiciousness of his precipitate philanthropy, it would be the effect of his letter in the School Board . Strong party feeling has appeared in that Board, as it was sure to appear; and there is a distinct division in it into Tories and Liberals—"Officials" and "Independents" they call themselves —such as arises in every English representative body. There is no harm in that, but rather good, though the debates in con- sequence have become preposterously long, and though it will be necessary for Parliament to give the Board the means of suppressing Obstruction, for without party feeling there would be no sufficient or continuous criticism. Nor do we see that the women on the Board quarrel worse than the men—the worst of them is tranquil beside Lord Salisbury—though they may feel personal questions more deeply, and write letters pervaded with a more visible tone of bitterness. But it is most inexpedient that the Home Office should even in appearance intervene in the contest to give victory to one party or the other ; and this is what Sir William Harcourt, with his impulsiveness, has allowed himself to do. He has thrown his whole weight against the Chairman and the majority. He probably did not intend it ; but the single cry at the next School Board elections will be St. Paul's School and his judgment upon the Chairman, and the result may be one which he and all friends of education will deplore. Mrs. Surr, who deserves all respect for her conduct in this matter, but who is not invariably right, will nominate half the candidates; and in all probability, the continuity of the Board's action, which it is so essential to maintain, will be very roughly broken. That is a very great misfortune, and it

Would have been avoided, if the Home Secretary, instead of streaming out in that style, had ordered a rigid—if possible, a judicial—inquiry into the allegations, before publishing his decision.