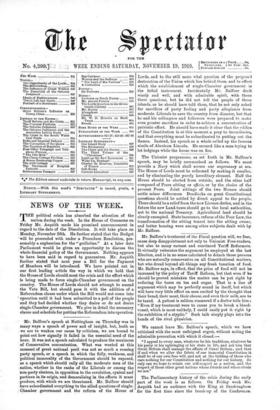 Mr. Balfour's treatment of the Fiscal question will, we fear,

cause deep disappointment not only to Unionist Free-traders, but also to many earnest and convinced Tariff Reformers. It virtually reiterates the argument he employed at the last Election, and is in no sense calculated to detach those persons who are naturally conservative on all Constitutional matters, but who dread beyond all. things any fresh taxation of food. Mr. Balfour says, in effect, that the price of food will not be increased by the policy of Tariff Reform, but that even if he should be proved mistaken the matter can be put right by reducing the taxes on tea and sugar. That is a line of argument which may be perfectly sound in itself, but which will have very little effect on men excited by the thought that their bread, their meat, their cheese, and even their milk, are to be taxed. A patient is seldom reassured if a doctor tells him s "Even if my treatment were to cause you to break a blood- vessel, which is most unlikely, I could easily put it right by the exhibition of a styptic." Such talk simply plays into the hands of the rival physician.