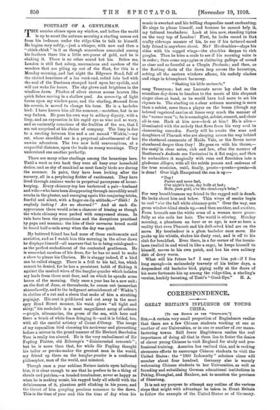 PORTRAIT OF A GENTLEMAN.

THE sunrise shines upon my window, and before the world is up to scent the autumn morning a starling comes out from his bedroom under the ridge-tiles to talk to himself. He begins very softly,—jest a whisper, with now and then a " chink-chink " in it as though somewhere concealed among his feathers there lies a little net-purse of gold, and he is shaking it. There is no other sound but his. Below me, London is still fast asleep, unconscious and careless of the wonders that are piling up out of the East, for this is a Monday morning, and last night the Edgware Road, full of the clotted heaviness of a lax week-end, rolled into bed with the seal of the Dustman stamped hard upon her eyelids, and will not wake for hours. The sky glows and brightens in the windless dawn. Flashes of silver stream across heaven like quick fishes moving in a shallow pool. An arrow-tip of light burns upon my window-pane, and the starling, groused from his reverie, is moved to change his tune. He is a bachelor bird : I have known him all the summer,—mateless, but in no way forlorn. He goes his own way in solitary dignity, with a limp, and an expression in his rapid eye so wise and so wary, and so eminently conscious of the frailties of the sex, that I am not surprised at his choice of company. The limp is due to a meeting between him and a cat named Wiskin,'—my cat, whose shredded ear is a perpetual advertisement of her unwise adventure. The two now hold conversations, at a respectful distance, upon the leads on sunny mornings. They understand one another perfectly.

There are many other starlings among the housetops here. Until a week or two back they were all busy over household duties, and as shy of mankind as most family birds are during the summer. In pairs, they have been looking after the nursery, all in a perplexing flutter of excitement. They have lived through anxious weeks in perpetual paroxysms of house- keeping. Every chimney-top has harboured a pair—husband and wife—who have been disappearing through incredibly small cracks in the plaster, and emerging again like conjuring-tricks, fearful and silent, with a finger-on-lip attitude,—" Shia ! Is anybody looking ? Are we observed ?" And at each dis- appearance there would arise a clamour of hissing as though the whole chimney were packed with compressed steam. In vain have been the precautions and the deceptions practised by papa and mamma: the hiss of their ravenous brood could be heard half-a-mile away when the day was quiet.

My battered friend has had none of these excitements and anxieties, and as I watch him this morning in the silver dawn

he displays himself—all unaware that he is being catalogued—

as the perfect embodiment of the contented gentleman. He is somewhat careless of his dress, for he has no need to make a show to please his Clarissa. He is shaggy indeed, if a bird can be called shaggy. There is a frill to his tail, too, which cannot be denied, for he has a persistent habit of flicking it

against the meshed wires of the burglar-puzzler which isolates my leads from those next door, and on which he spends some hours of the morning. Only once a year has he a new suit : on the first of June, or thereabouts, he comes out (somewhat shamefacedly, and to the indignant astonishment of ' Wiskin ') in clothes of a cat and a sheen that make of him a strutting popinjay. His coat is gold-laced and cut away in the most spry Bond Street manner, his waist glows "all tight and shiny," his neckcloth is a most magnificent array of colours —purple, ultramarine, the green of the 843a, with here and there a touch of white foam fringing it—and it is folded, too, with all the careful artistry of Count d'Orsay. The image of my rapscallion bird choosing his neckwear and pirouetting before a mirror in the grand manner of Sir Herbert Beerbohm Tree is really too absurd. He is the very embodiment of Sir Fopling Flutter, old Etherege's " disinterested coxcomb " ; but he is more than that, for while Sir Fopling thought his tailor or peruke-maker the greatest man in the world, my friend up there on the burglar-puzzler is a confirmed philosopher, man of the world, and minstrel.

Though once a year sublime Nature insists upon tailoring him, it is clear enough to see that he prefers to be a thing of shreds and patches,—a tousled troubadour, never so happy as when he is making music, his ragged body all athrill with the deliciousness of it, phantom gold clinking in his purse, and the throat of him gurgling precious nonsense to the dawn. This is the time of year and this the time of day when his

music is sweetest and his trilling rhapsodies most enchanting. He sings to please himself, and because he cannot help it., my tattered troubadour. Look at him now, standing tiptoe on the very top of London ! First, he looks round in that crafty sideways manner of his to see if his tattered-eared

lady friend is anywhere about. No P He chuckles—slaps his sides with his ragged wings—the chuckles deepen to rich gurgles. Then he tries a scale to see if his morning voice is

in order ; then come arpeggios in clattering gallops of sound as clear and as forceful as a Chopin Fantasia; and then, as

the flashing darts of the dawn leap across the housetops, setting all the eastern windows aflame, his melody dashes and rings in triumphant harmony.

" Shaking his little castanets," sang Tennyson; but our Laureate never lay abed in the soundless day-dawn to hearken to the music of this eloquent

singer close at hand, or he would have had more to set his rhymes to. The starling on a clear autumn morning is more than a soloist, more than a player on the bones (though my beloved vagabond carries at times very much the manner of the " corner man "); he is monologist, soloist, concert, and choir all in one. Hark at him now—look at him He is alive— illuminated with the melody that flows from his very soul in clamouring cascades. Surely will he awake the sons and daughters of Pharaoh who are sleeping across the way behind the shuttered casements of Maida Vale, or the Seven never

slumbered deeper than they ! He goes on with his theme,— the motif in clear notes, rich and low, after the manner of Beethoven's Andante con Variasicrni in A flat major, and then he embroiders it magically with runs and flourishes into a gladsome Allegro, with all the subtle pauses and cadenzas of the true musician, until, finally, presto—presto—presto—it is done! Over high Hampstead the sun is up:—

For very breathlessness my friend in the ragged snit is dumb. He looks about him and below. Thin wisps of smoke begin to curl "o'er the tall white chimney-pots." Over the way, one green window-blind steals np,—and then another, and another, From beneath one the -white arms of a woman move grace- fully as she coils her hair. The world is stirring. Monday morning, a phantasm an hour or so ago, is now so keen a reality that even Pharaoh and his dull-orbed kind are on the move. My troubadour is a glum bachelor once more. He packs up his whistle, shakes his dusty coat, and is off to his club for breakfast. Even there, in a far corner of the tennis- lawn (walled in and wired in like a cage), he keeps himself to himself, moves to his own patch, and has his own solitary dish of dewy worm.

What will his future be ? I may see him yet—if I live long enough—in melancholy travesty of his better days, a despondent old bachelor bird, piping sadly at the doors of his more fortunate kin up among the ridge-tiles, a starling's version, huskily haunting, of Tosti's " Good-Bye." IL A.