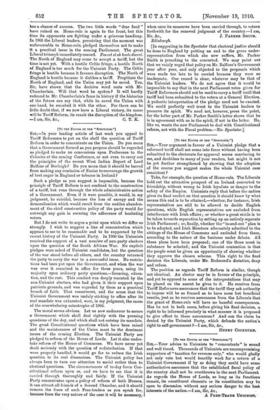 article of last week you appeal to Tariff Reformers to put on the shelf the question of Tariff Reform in order to concentrate on the Union. Do you mean that a Government formed as you propose should be regarded as pledged to make no concessions upon Preference to the Colonies at the coming Conference, or not even to carry out the principles of the recent West Indian Report of Lord Balfour of Burleigh ? Do you mean that it should be barred from making any remission of Excise to encourage the growth of beet sugar in England or tobacco in Ireland ?

Such a pledge as you suggest is impossible, because the principle of Tariff Reform is not confined to the construction of a tariff, but runs through the whole administrative action of a Government. Even if it were possible, it would, in my judgment, be suicidal, because the loss of energy and the demoralisation which would result from the sudden abandon- ment of the chief constructive policy of the party would far outweigh any gain in securing the adherence of hesitating voters.

But I do not write to argue a point upon which we differ so strongly. I wish to suggest a line of concentration which appears to me to be reasonable and to be supported by the recent history of the Unionist Party. In 1900 the Unionists received the support of a vast number of non-party electors upon the question of the South African War. No explicit pledges were asked of Unionist candidates, but the question of the war stood before all others, and the country returned the party to carry the war to a successful issue. No restric- tions had been put upon the Government, and when the war was over it remained in office for three years, using its majority upon ordinary party questions,—licensing, educa- tion, and the rest. This conduct was deeply resented by the non-Unionist electors, who had given it their support upon patriotic grounds, and was regarded by them as a practical breach of faith. That resentment, and the sense that the Unionist Government was unduly sticking to office after its real mandate was exhausted, were, in my judgment, the cause of the overwhelming catastrophe of 1906.

The moral seems obvious. Let us now endeavour to secure a Government which shall deal rightly with the pressing questions of the day, and which shall not outstay its mandate. The great Constitutional questions which have been raised and the maintenance of the Union must be the dominant issues of the coming Election. The Unionist Party are pledged to reform of the House of Lords. Let it also under- take reform of the House of Commons. We have never yet dealt seriously with the question of redistribution. If that were properly handled, it would go far to reduce the Irish question to its real dimensions. The Unionist policy has always been to turn our attention to social rather than to electoral questions. The circumstances of to-day force Con- stitutional reform upon us, and we have to see that it is carried through thoroughly and fairly. If the Unionist Party concentrates upon n policy of reform of both Houses, it can attract all friends of a Second Chamber, and it should remove the fears of such Free-tradere as you speak for, . because from the very nature of the case it will be necessary,-

when once its measures have been carried through, to return forthwith for the renewed judgment of the country.—I ami

[In suggesting in the Spectator that electoral justice should be done to England by putting an end to the gross under- representation from which she now suffers, Mr. Parker Smith is preaching to the converted. We may point out that we vainly urged that policy on Mr. Balfour's Government year after year, and only objected to the proposals which were made too late to be carried because they were so inadequate. Our record is clear, whatever may be that of the Unionist leaders. We do not agree that it would be impossible to say that in the next Parliament votes given for Tariff Reformers should not be used to carry a tariff until that tariff had been submitted to the voters at a General Election. A pedantic interpretation of the pledge need not be exacted. We could perfectly well trust to the Unionist leaders to preserve its spirit. We need not, however, press the point, for the latter part of Mr. Parker Smith's letter shows that he is in agreement with us in the spirit, if not in the letter. He, like us, wants the new Parliament to deal with Constitutional reform, not with the Fiscal problem.—En. Spectator.]