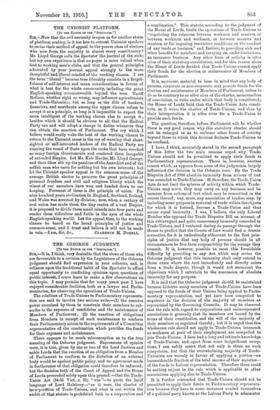 [To THE EDITOR Or THE " SPECTATOR...1 SIB,—Now that the evil necessity is upon us for another storm of platform oratory, is it too late to entreat Unionist speakers to,revise their method of appeal to the poorer class of electors *ho now form the majority in almost every constituency ? Mr. Lloyd George calls the Spectator the journal of the rich; but my own experience is that no paper is more valued when lent to working men's clubs, and that the general principles advocated by your journal appeal strongly to the more thoughtful-and liberal-minded of the working classes. I use the term " liberal " because true liberality consists in a forget- fulness of self-interest and mean considerations in favour of what is beat for the whole community, including the great English-speaking commonwealth beyond the seas. Tariff Reform, whether right or wrong, may. influence agriculturists and Trade-Unionistc; but so long as the elite of bankers, financiers, and merchants among the upper classes refuse to accept it as a principle, so long is it impossible to expect the more intelligent of the working classes also to accept it ; besides which it should be obvious to all that the Radical Party can and will adopt a change in duties -whenever they can obtain the sanction of Parliament. The cry which I believe would really wake the best of the working classes to return to the Unionist cause is the cry of warning that short- sighted or self-interested leaders of the Radical Party are steering the vessel of State upon the rocks that have wrecked so many foreign Governments and rendered them incapable of extended Empire. Let Mr. Keir Hardie, Mr. Lloyd George, and their likes stir up the passions of the Anarchist and of the selfish man who cares for nothing but his own interests ; but let the Unionist speaker appeal to the common-sense of the average British elector to preserve the great principles of personal freedom and civil and religious liberty which the wisest of our ancestors have won and handed down to our keeping. Foremost of these is the principle of union. For nine hundred years civilisation in England, Scotland. Ireland, and Wales was arrested by division; now, when a century of real union has made them the tiny centre of a vast Empire, it is proposed to divide these small islands into four parts and render them ridiculous and futile in the eyes of the whole English-speaking world! Let the appeal, then, to the working classes be based on the broad principles of justice and common-sense, and I trust and believe it will not be made