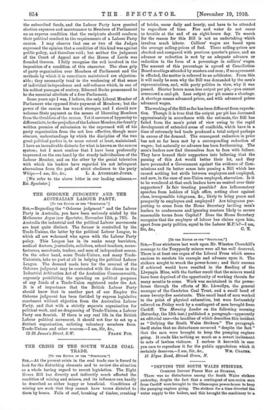 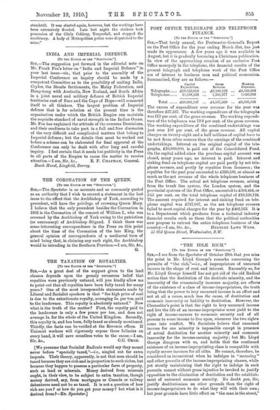 [To THE EDITOR 07 THE " SPECTATOR."] SIR,—Yonr strictures last

week upon Mr. Winston Churchill's message to the Tonypandy miners were all too well deserved. There is at least one organ of the Liberal Press which seems anxious to emulate his example and advance upon it. The strikers sought to wreck the power-house ; and their success if achieved would have resulted in the flooding of the Llwynpia Mine, with the further result that the miners would have been deprived of the opportunity of working therein for many months to come. Work was maintained in the power- house through the efforts of Mr. Llewellyn, the general manager of the Cambrian Coal Trust, and a small band of some twenty-five assistants. This small band of men worked to the point of physical exhaustion, but were fortunately relieved on Friday week by a contingent of men brought from Cardiff. The Morning Leader on the following morning (Saturday, the 12th inst.) published a paragraph—apparently an editorial one—the headline of which describes this incident as "Defying the South Wales Strikers." The paragraph itself states that no disturbance occurred "despite the fact" that the men were brought to keep the pumping engines going. It reads like nothing so much as a covert incitement to acts of lawless violence. I enclose it herewith in case you care to reproduce it for the public opprobrium which it certainly deserves.—I am, Sir, &e., Wm. COATES. 15 Elie Road, Stroud Green, N.

There was no disturbance among the South Wales strikers yesterday, despite the fact that a contingent of non-union men from Cardiff were brought to the Glamorgan power-house to keep the pumping engines going. The strikers for a time diverted the water supply to the boilers, and this brought the machinery to a

standstill. It was started again, however, but the workings have been extensively flooded. Late last night the strikers took possession of the Cilely Colliery, Tonyrefail, and stopped the machinery. A body of Metropolitan police were dispatched to the mine."