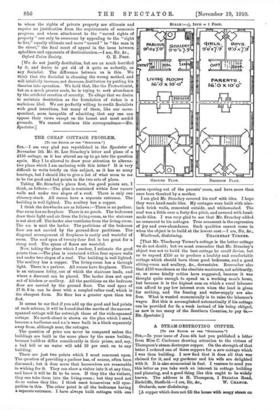 [To THE EDITOR Or THE " SPECTATOR.'l

SIR,—I am very glad you republished in the Spectator of November 5th Mr. St. Loe Strachey's letter and plans of a £150 cottage, as it has stirred me up to go into the question again. May I be allowed to draw your attention to alterna- tive plans which I am enclosing with this letter? It is very difficult to write briefly on this subject, as it has so many bearings, but I should like to give a list of what seem to me to be the good and bad points in the two sets of plans.

Taking Mr. Strachey's plans first, the good points are, I think, as follows :—The plan is contained within four square walls and under two slopes of a roof. There is only one chimney-stack. All rooms have a separate entrance. The building is well lighted. The scullery has a copper.

I think the drawbacks are as follows :—There is no parlour. One room has no fireplace. There is no porch. The bedrooms draw their light and air from the living-room, as the staircase is not shut off. The larder also ventilates from the living-room. The e.c. is next the larder. The partitions of the bedroom floor are not carried by the ground-floor partitions. The diagonal arrangement of fireplaces is costly and wasteful of room. The roof span of twenty-four feet is too great for a cheap roof. The spans of floors are wasteful.

Now, taking the plans which I enclose, I estimate the good points thus :—The plan is contained within four square walls and under two slopes of a roof. The building is well lighted. The scullery has a copper. The living-room has a through light. There is a parlour. All rooms have fireplaces. There is an entrance lobby, out of which the staircase leads, and where a doormat can be placed. The larder does not open out of kitchen or scullery. All the partitions on the bedroom floor are carried by the ground floor. The roof span of 17 ft. 6 in. can be done with a coupled rafter roof, which is the cheapest form. No floor has a greater span than ten feet.

It seems to me that if you add up the good and bad points of each scheme, it will be found that the merits of the narrow- spanned cottage will far outweigh those of the wide-spanned cottage. No earth-closet is shown on the plan which I send, because a toolhouse and e.c.'s were built in a block separately away from, although near, the cottages.

The question of price can never be compared unless the buildings are built in the same place by the same builder, because builders differ considerably in their prices, and, say, a bad hill or no water will add 10 per cent. on to any building.

There are just two points which I must comment upon. The question of providing a parlour has, of course, often been discussed ; but it does seem that housewives are reasonable in wishing for it. They can show a visitor into it at any time, and know it will be fit to be seen. If they like the visitors, they can take them into the living-room ; but they need not do so unless they like. I think most housewives will sym- pathise in this. The other point is all the bedrooms having a separate entrance. I have always built cottages with one room opening out of the parents' room, and have more than once been thanked by a mother.

I am glad Mr. Strachey covered his roof with tiles. I hope they were hand-made tiles. My cottages were built with nine- inch brick walls, cemented outside, and whitewashed. The roof was a little over a forty-five pitch, and covered with hand- made tiles. I was very glad to see that Mr. Strachey added no ornament to his cottages. True ornament is the expression of joy and over-abundance. Such qualities cannot come in when the object is to build at the lowest cost.—I am, Sir, &c.,

[That Mr. Thackeray Turner's cottage is the better cottage we do not doubt; but we must remember that Mr. Strachey's object was not to build the best cottage he could devise, but so to expend £150 as to produce a healthy and comfortable cottage which should have three good bedrooms, and a good sitting-room and scullery, &c., downstairs. Remember also that £150 was chosen as the absolute maximum, not arbitrarily, or, as some kindly critics have suggested, because it was thought quite enough to spend on a working man's home, but because it is the highest sum on which a rural labourer can afford to pay low interest even when the land is given for nothing, and the fencing and water-supply are also free. What is wanted economically is to raise the labourer's wages. But this is accomplished automatically if his cottage can be provided for 3s. a week instead of his being obliged, as now in too many of the Southern Counties, to pay 6s.— ED. Spectator.]