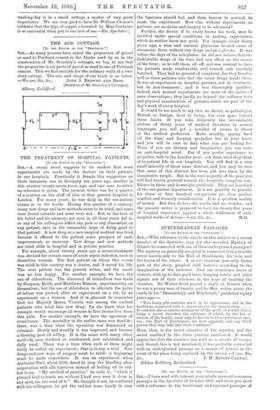 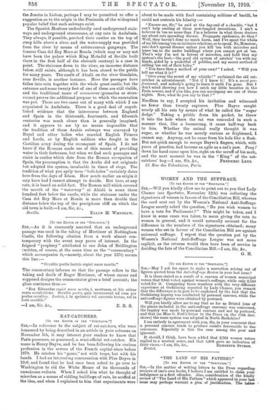 with interest your article upon subterranean passages in the Spectator of October 29th, and since you start with a reference to the traditional underground passages of the Jesuits in Lisbon, perhaps I may be permitted to offer a suggestion, as to the origin in the Peninsula of the widespread popular belief that such subways exist.

The Spanish Moslems undoubtedly used underground stair- ways and underground storerooms, at any rate in Andalusia. They always, if possible, perched their castles on the top of steep hills above a river, and the water-supply was provided from the river by means of subterranean gangways. The famous Casa del Rey Moro at Ronda (which may or may not have been the palace which King Motadid of Seville built there in the first half of the eleventh century) is a case in point. The staircase down to the river, an immense distance below, still exists, although it has been closed to the public for many years. The castle of Alcald on the river Guadaira, near Seville, is another instance. Here the passages have fallen into ruin together with the whole great castle, but the entrance and some twenty feet of one of them are still visible, and the traditional name of maz»wrras (granaries or store- rooms) proves the additional purpose to which the excavation was put. These are two cases out of many with which I am acquainted in Andalusia. There is a good deal of unpub- lished evidence that the intercourse between England and Spain in the thirteenth, fourteenth, and fifteenth centuries was much closer than is generally imagined, and it appears to me by no means impossible that the tradition of these Arabic subways was conveyed by • Royal and other ladies who married English Princes and Lords, or by English soldiers who fought in the Castilian army during the reconquest of Spain. I do not know if the Romans made use of this means of providing water in their fortresses, but when we find such passages and stairs in castles which date from the Roman occupation of Spain, the presumption is that the Arabs did not originate but adopted the system, invaluable in times of siege. The tradition of what you aptly term " bolt-holes " certainly dates here from the days of Islam. How much earlier an origin it may have had I cannot attempt to decide. But here, at any rate, it is based on solid fact. The Roman mill which covered the mouth of the " waterway " at Alcala is some three hundred feet below the castle, while the staircase under the Casa del Rey Moro at Ronda is more than double that distance below the top of the precipitous cliff on which the old town is built.—I am, Sir, &e., Seville. ELLEN M. WRISHAW.