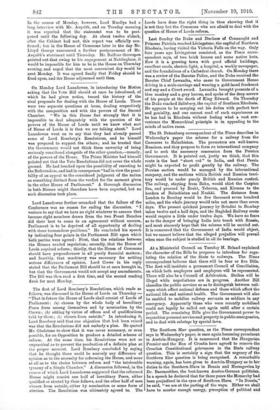 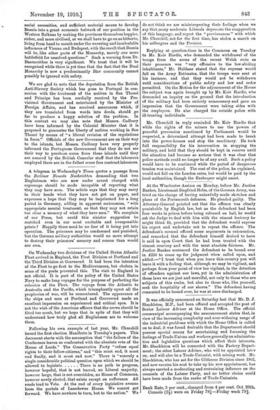 Page 2, 19 November 1910 — The Southern Slav question, as the Times correspondent says in
Close

The Southern Slav question, as the Times correspondent says in

Wednesday's paper, is once again becoming prominent in Austria-Hungary. It is announced that the Hungarian Premier and the- Ban of Croatia have agfeeU to remove the Croatian Constitutional grievances in the State railway question. This is certainly a sign that the urgency of the Southern Slav question is being recognised. A remarkable warning, again, has been given to Austria-Hungary as to her duties to the Southern Slays in Bosnia and Herzegovina by Dr. Baernreither, the best-known Anstro-German

In a speech he declared that for three years the Monarchy had been prejudiced in the eyes of Southern Slays. "In Bosnia," be said, " we are at the parting of the ways. Either we shall have to muster enough energy, • perception of political and social necessities, and sufficient material means to develop Bosnia into a great economic bulwark of our position in the Western Balkans by making the provinces themselves happier, richer, and more civilised, or we shall have to go on as hitherto, living from hand to mouth under the wavering and incalculable influences of Vienna and Budapest, with the result that Bosnia will be, like other parts of the Monarchy, merely one more battlefield for unsolved questions." Such a warning from Dr. Baernreither is very significant. We trust that it will be recognised while there is yet time that the fact that the Dual Monarchy is now a predominantly Slav community cannot possibly be ignored with safety.