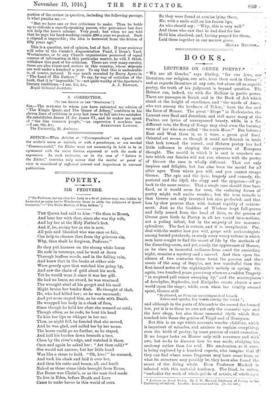 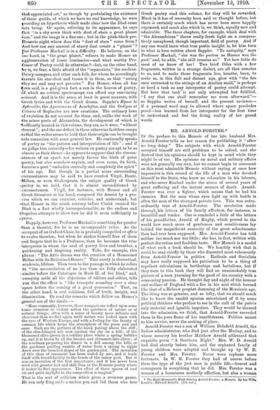 " WE are all Greeks," says Shelley, " for our. laws, Mir" 1 literature, our religion, our arts, have their root in Greece and as regards literature at any rate, but above altos regards poetry, the truth of his judgment is beyond question. Tile Hebrew can, indeed, vie with the Hellene in poetic power. There are passages in Isaiah and in the Book of Job whidh stand at the height of excellence, and " the words of Amos, who was among the herdmcn of Tekoa," have the fire and the force of Homer. The great " Dirge " in Ecclesiastes, the Lament over Saul and Jonathan, and still more many of the Psalms, are lyrics of unsurpassed beauty, while, in a far different vein, the Song of Songs may rival even the burning verse of her who was called " the tenth Muse." But between. East and West there is, as it were, a great gulf fixed. Oriental art seems as though it could' not flourish in Janda that look toward the sunset, and Hebrew' poetry has had' little influence in shaping the expression of European thought. The mould in which it is cast is somehow one into which our fancies will not run, whereas with the poetry of Greece the case is wholly different. That not • only inspires and delights, but has also been the model' for all after ages. Turn where you will, and you cannot escape Greece. The epic and the lyric, tragedy and comedy, the pastoral and the idyll, the elegy and the epigram,—alrgo back to the same source. That a single race should thus have fixed, as it would seem for ever, the enduring forma of'' poetry might well excite wonder; but the trne miracle is that Greece not only invented but also perfected, and that" less by slow process than with instant rapidity of achieve- ment.. Just as the Goddess of Wisdom leapt fultgrown and fully armed from the head of Zeus, so the genius of Greece gave birth to Poetry in all her varied incarnations, not a puling infant, but in the majesty of her maturest splendour. The fact is certain, and it is inexplicable. For, deal with the matter how you will, grope with archaeologists among buried potsherds, or study every weary volume in which men have sought to find the secret of life by the methods of ' the dissecting-room, and yet, surely, the appearance of Homer, as he rises in immortal radiance from amid the encircling night, remains a mystery and a marvel. And then upon the silence of two centuries there burst the passion and tliea music of the song of Sappho, not less v:onderful• than the' first-heard notes of the nightingale's melody in spring. Or; again, two hundred years pass away when on a sudden Tragedy " in sceptred pall comes sweeping by," and the masterpieces of Aeschylus, Sophoclea, and Euripides create almost. a new • world upon the stage; while, even when her vitality seemed, spent, Greece still "Scattered, as from an =extinguished hearth Ashes and sparks, her words among the world"; and although in the poets of Alexandria the sacred fire horned. low, yet it is to them we owe not only the romantic epic and the love elegy, but also those immortal idylls which first touched into flame the genius of Virgil and of Tennyson.

But this is an age which accounts wonder childlike, which is impatient of miracles, and anxious to explain everything, even the birth of poetry, by some process of exact causation. It no longer looks on Homer only with reverence and with awe, but seeks to discover how he was made, studying his. anatomy rather than his soul. His mechanism, as it were, • is being explored by a hundred experts, who imagine that if.*1 they can find where some fragment may have come from, or what its structure may possibly be, they have also found the secret of the living whole. Even Professor Mackail is r infected with this material tendency. The Iliad, he writes, "embodies the work of whole guilds of artists, of whole ages • Lectures on Greek Poetry. By J. W. Mackail, Professor of Poetry in tins University of Oxford. London : Longman!! and Co. [9s. 6.1. net.]

that appreciated art," as though by postulating the existence of these guilds, of which we have no real knowledge, he were providing an hypothesis which made clear how the Iliad came into. being. Or again, referring to its appearance, he says that "in. a sky sown thick with dust of stars a great planet rose," and the image is a fine one; but in the pitch-black pre- Homeric night where does this " dust of stars " come from ? And how can any amount of starry dust create- a " planet " ?

put Professor Mackail is in a difficulty. He believes, on the eneJand; in " the great planet," refuses to make Homer an

agglomeration of lesser luminaries—and what worthy Pro- fessor of Poetry could do otherwise ?—but, on the other band, is., we fear, a little afraid of the "separatists," the nucleus- Oeiiry-mongers, and other such folk, for whom be accordingly invents his star-dust, and tosses it to them, so that "seeing they see and may not perceive." For Homer, when all has keen said, is a god-given fact, a sun in the heaven of poetry, -of :which no critical spectroscope can afford any convincing

account. And it. is the same, at least in great measure, with .Greek lyrics and with the Greek drama. Sappho's Hymn to Aphrodite, tbe Agamemnon of Aeschylus, and the Oedipus at Colon of Sophecles are new creations. The ordinary laws -of evolution do not account for them, and, unlike the work of the minor poets of Alexandria, the development of which is 'brilliantly treated in this volume, they are, as it were, " without -sleseent"; and the one defect in these otherwise faultless essays

-istbat the writer seems to hold that their origin can be brought Alas) connexion with some general law. He continually speaks of poetry as "the pattern and interpretation of life " ; and if

we jage him correctly—for writers on poetry are apt to be as -elusive as their theme—be appears to suppose that the circum- -stances of an epoch not merely favour the. birth of great

,poetry, but also somehow explain, and even cause, its birth, -becausea poet "embodies centrally and completely the spirit" of his age. But though in a partial sense surrounding

circumstances may be said to have created Virgil, Dante, -Milton, or even Shakespeare, the unique quality of Greek -poetry is, we hold, that it is almost unconditionel by -•circumstances. Virgil, for instance, with Homer and all - Greek literature at his hand, composed the Aeneid by a pro- - cess which we can examine, criticise, and understand; but ssthat Homer in the ninth century before Christ created the Iliad is a fact wholly incomprehensible, as the endless and k-hopeless attempts to show how he did it seem sufficiently to cpreve.

Happily, however, Professor Mackail is something far greater .than a theorist, for he is an incomparable critic. As the occupant of an Oxford Chair, he is probably compelled ex officio to evolve theories ; but when he shakes himself free of them end forgets that he is a Professor, then he becomes the true interpreter in whom the soul of poetry lives and breathes, a quickening and inspiring reality. Take, for example, this . phrase : "The Attic drama was the creation of a Homerised Hellas with its Hellenised Homer." That surely is theoretical, academic, lifeless. Then turn to the passage in which he refers to "the accumulation of no less than six fully elaborated • similes before the Catalogue in Book II. of the Iliad," and, sweeping aside all the objections of editors and critics, tells . you that the effect is "like trumpets sounding over a clear -space before the coming of a great procession." That, on .. the other hand, is real criticism, full of truth, insight, and • .illumination. Or read the remarks which follow on Homer's :general use of the simile :—

. "More commonly, however, these comparisons reflect upon some tense situation or violent action the quietness of nature or of natural things ; often with a sense of beauty more delicate and observant than we find again until nature was looked upon with the eyes of Western Europe, and with a feeling for the beauty of common life which keeps the atmosphere of the poem cool and sane. Such are the pictures of the hawk poising above the cliff ; of the slim-foliaged ash seen against the sky on a, hill; of the blossomed olive grown in a solitary place where a spring bubbles up, and it is blown by all the breezes and shimmers into silver; of the woodman preparing his dinner in a dell among the hills, or the gardener guiding runlets of water from a spring to ripple down over the trenched slopes of his garden-plot. The invention of this class of ornament has been staled by use; and it lends • itself with horrid facility to the hands of the minor poet. But it was an invention of the first importance; and it has never been used with greater tact and skill than in the Homeric poetry where it makes its first appearance. The effect of these spaces of cool air and quiet daylight in the composition is magical."

That is the sort of criticism which gives a reviewer pause. He can only fling aside a useless pen and bid those who love Greek poetry read this volume, for they will be rewarded. Much in it has of necessity been said or thought before, but there is certainly much which has never been more happily expressed, and much also which is, we, think, equally new and admirable. The three chapters, for example, which deal with "the Alexandrian" throw really fresh light on a compara- tively unexplored, though important, field of poetry. And if any one would learn what true poetic insight is, let him turn to what is here written about Sappho. "To antiquity," says Professor Mackail, " she was the poetess as Homer was the poet," and, he adds, "she. still remains so." Yet how little do most of us know of her ! Two brief Odes with a few fragments, written in a strange dialect, are all that remains to us, and to make those fragments live, breathe, burn, to make us, in this dull and distant age, glow with "the fire once entrusted to the strings of. an Aeolian maid," is perhaps as hard a task as any interpreter of poetry could attempt. But here that task- is not only attempted but fulfilled. "I say that one shall remember me even afterward,"— so Sappho writes of herself, and the present reviewer— if a personal word may be allowed where space precludes proof—has learned from her interpreter for the first time to understand and feel the living reality of her proud words.