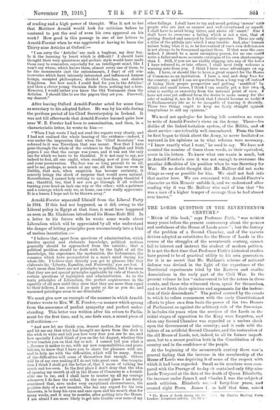 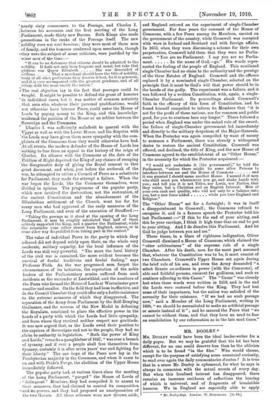 THE LORDS QUESTION IN THE SEVENTEENTA CENTURY.*

" MUCH of this book," says Professor Firth, "-was writtei many years before the present controversy about the power and usefulness of the House of Lords arose" ; but the history of the problem of a Second Chamber, and of the v'arions devices adopted as substitutes for the House of Lords in the course of the struggles of the seventeenth century, cannot fail to interest and instruct the student of modern politic's. It is not the first time that Professor Firth's historioal studies have proved to be of practical utility to his own generaticra for it is no secret that Mr. Haldane's schethe 'of nationals defence was devised in the light of the experience of. the. Territorial experiments tried by the Eastern and similar Associations in the early part of the Civil War. In the present volume he has " endeavoured to let the actors 'in theft& events, and those who witnessed them, speak for themselves,, and to set forth their opinions and arguments for the instruc- tion of their descendants." The period covered by the events to which he refers commences with the early ConstitutionSF efforts to place on a firm basiS the power of the two kiairees of Parliament as against the arbitrary rule 'of the Sovereign. It includes the years when the services of the Lords in the initial stages of opposition to the King were .forgotten," and when any Second Chamber was regarded as a useless ;cheek upon the Government of the country ; and it ends with the failure of an artificial Second Chamber, and the 'restoration of the old House of Lords, not, indeed, to all its former impoilt- ance, but to a secure position both in the Constitution 'of the country and in the confidence of the people.

At the beginning of the seventeenth century there was'a general feeling that the increase in the membership of the House of Lords was depriving it•of some of the respect -With, which it had been regarded. ''Small as its numbers were com- pared with the Peerage of to-day pit contained only fiftyznine Lords Temporal at the date of the death of Queen Elizabeth), the increase under James I. and Charles I. was the-subjectv of much criticism. Elizabeth reigni.d 'forty-four years, and created eight Peers. James I., in half that time, raised • The House of Lords daring the Ct.. ' By Charles Harding Firth, London: Longmans and Co. [7s. 6.d.

':nearly sixty commoners to the Peerage, and Charles I. ;between his.accession and the first meeting of the Long

,Parliament, made thirty new Barons. Both Kings also made ,promotions in the ranks of the Peerage itself. The new ", nobility were not nevi homines ; they were most of them men

of.family, and the honours conferred upon merchants, though athey were the subject of some criticism, were justified by the wiser men of the time :— 'It can be no dishonour that citizens should be admitted to the nobility. It .hath not only been frequent and usual, but take that glolious sun upen Elizabeth She was descended of citezens That a merchant should have the title of nobility, truly of all other professions they deserve it best, for it is generous, und,it, is over accompanied with the greatest prudence, and of all others doth the most enrich the nation."

The .real objection lay in the fact that peerages could be -bought. It might be possible to defend the grant of honours ' in' individual cases, but it was matter of common notoriety that man who, whatever their personal qualifications, would not otherwise have become Beers, could enter the House of Lords by paying money to the King, and this knowledge

weakened the position of the House as an arbiter between the

Sovereign and the Commons.

' .Charles I. was sufficiently maladroit to quarrel with the per as well as with the Lower House, and his disputes with

the Lords may have given them more sympathy with the com- plaints Of the Commons than they would otherwise have had.

'At, all events, the modern defender of the House of Lords has nethmg to fear from= appeal to the history of the reign of '.0arles. Its alliance with the Commons at the date of the

Petition of Right deprived the King of any chance of escaping 'the disagreeable duty of giving the Royal consent to that great document, and when, just before the outbreak of the war, he attempted to utilise a Council of Peers as a substitute for Parliament, they made the attempt a failure. When the war began the Lords, like the Commons themselves, were divided in opinion. The programme of the popular party, which now involved the destruction, not the restoration, of the aneient Constitution and the abandonment of the Elizabethan settlement of the Church, went too fax for many men who had approved of the early measures of the _Long Parliament, and even of the execution of Strafford

"Taking the peerage as it stood at the opening of the Long - Parliament, it may be roughly calculated that half of them actively supported the King, and a quarter the Parliament, while the remainder were either absent from England, minors, or in some other way dispal ;Red from taking part in the contest."

• The value of individual Peers to the party to which they adhered did not depend solely upon their, on the whole very moderate, military capacity, for the local influence of the Lords was still very powerfal. " The more the local history of the civil war is examined, the more evident becomes the survival of feudal traditions and feudal feeling," says . Professor Firth. As the war progressed men forgot the circumstances of its initiation, the reputation of the noble leaders of the Parliamentary armies suffered from such incidents as the surrender at Lostwithiel, and the numbers of the Peers who formed the House of Lords at Westminster grew smaller and smaller. On the field they had been ineffective, and in the Council Chamber they could offer only a feeble resistance :to the extreme measures of which they disapproved. The separation.of the Army from Parliament by the Self-Denying Ordinance, and the success of the New Model in defeating the Royalists, combined to place the effective power in the hands of a party with which the Lords had little sympathy, . and from whom they received neither respect nor gratitude.

It was now argued that, as the Lords owed their position to .-the caprices of Sovereigns and not to the people, they had no :.claim to authority in legislation. " Both the power of King and Lords," remarks a pamphleteer of 1647, " was ever a branch of tyranny, and if ever a people shall free themselves from ..tyranny, certainly it is after seven years' war and fighting for their liberty." The one hope of the Peers now lay in the Presbyterian majority in the Commons, and when it came to an end with Pride's Purge, the abolition of the Upper House immediately followed.

The popular party had, at various times since the meeting of the Long Parliament, "purged " the House of Lords of " delinquent " Members, they had compelled it to assent to their measures, they had claimed to control its composition • -• and its powers, and they had proposed an amalgamation of the two Houses. AU these schemes were now thrown aside, and England entered on the experiment of single-Chamber government. For four years the •remnant of the House of Commons, with a few Peers among its Members, carried on the government of the country, while Cromwell was occupied with wars in Ireland and Scotland and with foreign affairs.

In 1653, when they were discussing a scheme for their own perpetuation, Cromwell told them that they were no Parlia- ment. "You are no Parliament. I say you are no Parlia- ment In the name of God,—go." His words repre- sented the feeling of the people of England. This mutilated single Chamber had no claim to the authority and the prestige of the three Estates of England. Cromwell and the officers replaced it by a nominated single Chamber, selected on the principle that it must be God's will that power should be in the hands of the godly. The experiment was a failure, and it was followed by a written Constitution, with, again, a single- Chamber Parliament. Its proceedings shook Cromwell's faith in the efficacy of this form of Constitution, and he found himself compelled to inform its Members that "it is not for the profit of these nations, nor for common and public good, for you to continue here any longer." There followed a period when England was under the naked rule of the sword ; the failure of single-Chamber government led immediately and directly to the military despotism of the Major-Generals.

When the Protector was again compelled by want of money to summon a Parliament, there was already a widespread desire to restore the ancient Constitution. Cromwell was offered, and declined, the title of King, and the new House of Commons agreed to the establishment of an "Other House," in the necessity for which the Protector acquiesced :— "I would not undertake it [the government]," he told the Parliament, "unless there might be some other Persons to interfere between me and the House of Commons . . . . . . and it was granted I should name another House. I named it of men who shall meet you wheresoever you go, and shake hands with you; and tell you it is not Titles, nor Lords, nor Parties, that they value, but a Christian and an English Interest. Men of your own rank and quality, who will not only be a balance unto you, but a new force added while you lovo England and Religion."

The "Other House" sat for a fortnight; it was in itself a disappointment to Cromwell ; the Commons refused to recognise it, and in a famous speech the Protector told his last Parliament :—" If this be the end of your sitting, and this be your carriage, I think it high time that an end be put to your sitting. And I do dissolve this Parliament. And let God be judge between you and me."

Three times, in a blaze of righteous indignation, Oliver Cromwell dismissed a House of Commons which claimed the " utter arbitrariness " of the supreme rule of a single Chamber. After his death, men for the most part assumed that, whatever the Constitution was to be, it must consist of two Chambers. Cromwell's Upper House sat again during the brief rule of his son, and even the Army demanded "a select Senate co-ordinate in power (with the Commons], of able and faithful persons, eminent for godliness, and such as continue adhering to this Cause." The " Cause " was already lost when these words were written in 1659, and in the end the Lords were restored before the King. They had lost some of their importance, but the nation was satisfied of the necessity for their existence. " If we had no such peerage now," said a Member of the Long Parliament, writing in 1680, " we should be necessitated to make an artificial peerage

or senate instead of it " ; and he assured the Peers that "we cannot be without them, and that they have no need to fear an annihilation by our reformation as in the late mad times."