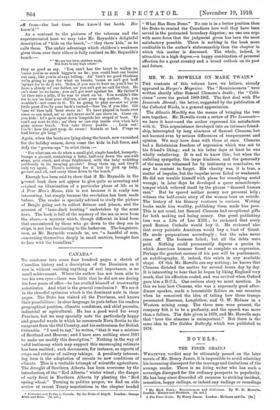 CANADA.* To condense into some four hundred pages a sketch

of Canadian history and a description of the Dominion as it now is, without omitting anything of real importance, is no small achievement. Where the author has not been able to use his own eyes—there was little that he did not see during his four years of office—he has availed himself of trustworthy substitutes. And what is the general conclusion ? We see it in the cheerful optimism which is the dominant note in these pages. The Duke has visited all the Provinces, and knows their possibilities : in clear language he puts before his readers geographical position, climatic conditions, and chief pursuits, industrial or agricultural. He has a good word for every Province, but we may specially note the particularly happy and graceful words in which he commends Nova Scotia to the emigrant from the Old Country, and his enthusiasm for British Columbia. "I used to say," he writes, "that it was a mixture of Scotland and Heaven ; and I have seen nothing since 1883 to make me modify this description." Nothing in the way of valid testimony which may support this encouraging estimate has been omitted ; such documents, for instance, as reports of crops and returns of railway takings. A peculiarly interest- ing item is the adaptation of cereals to new conditions of climate. This is a veritable triumph of scientific agriculture. The drought of Southern Alberta has been overcome by the introduction of the "Red Alberta" winter wheat ; the danger of early frOst in Northern Alberta by planting the "Red spring wheat." Turning to politics proper, we find an able review of recent Treaty negotiations in the chapter headed

• Yesterday and To-day in Canada. By the Duke of Argyll. London: George Allen and Sons. [6s. net.]

" What Has Been Done." No one is in a better position than the Duke to remind the Canadians bow well they have been served in the protracted boundary disputes ; no one can urge with more force that the judgment given has been the most satisfactory possible. There is nothing in the book more creditable to the author's statesmanship than the chapter in which this matter is discussed. The whole, indeed, is attractive in a high degree,—a happy combination of personal affection for a great country and a broad outlook on its past and future.