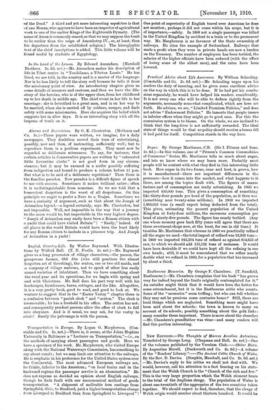 Alarms and Discursions. By G. K. Chesterton. (Methuen and

5s.)—These papers were written, we imagine, for a daily :newspaper. They doubtless served their turn of entertaining, possibly, now and then, of instructing, sufficiently well ; but to reproduce them is a perilous experiment. They must now be regarded as deliberate utterances. To say, for instance, that certain articles in Conservative papers are written by " exhausted little Levantine clerks " is not good form in any circum- stances; but it may be excused in a scribe possibly suffering from indigestion and bound to produce a column before 11 p.m. But what is to be said of a deliberate repetition ? Then there is the familiar paradox. Now paradox is a difficult figure of speech to use with success. Sometimes it makes brilliant satire ; often it is undistinguishable from nonsense. So we are told that a benevolent despotism is the worst of all despotisms. On this principle we ought to prefer a Nero to a Trajan. Sometimes we have a curiosity of argument, such as that about the Joseph of Arimathea legend.—a legend certainly, says Mr. Chesterton, but not impossible. Well, not impossible in the way that a journey to the moon would be, but improbable in the very highest degree. '"Joseph of Arimathea may easily have been a Roman citizen with a yacht that could have visited Britain" ! "Easily," indeed. Of all places in the world Britain would have been the least likely for any Roman citizen to include in a pleasure trip. And Joseph of Arimathea in a yacht !