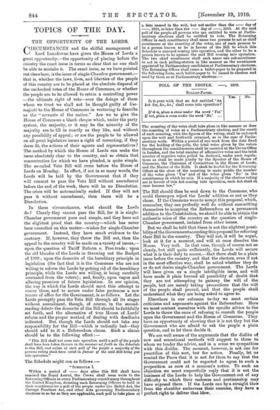 • THE OPPORTUNITY OF THE LORDS.

CIRCUMSTANCES and the skilful management of Lord Lansdowne have given the House of Lords a great opportunity,—the opportunity of placing before the country the exact issue in terms so clear that no one shall be able to mistake it. The exact issue, as we have pointed out elsewhere, is the issue of single-Chamber government,— that is, whether the laws, lives, and liberties of the people of this country are to be placed at the absolute disposal of the unchecked votes of the House of Commons, or whether the people are to be allowed to retain a controlling power —the ultimate right of veto—over the doings of those whom we trust we shall not be thought guilty of lese- majeste to the House of Commons in venturing to describe as the " servants of the nation." Are we to give the House of Commons a blank cheque which, under the party system, the majority, or it may be the minority of the majority are to fill in exactly as they like, and without any possibility of appeal ; or are the people to be allowed on all great legislative issues a right of correcting, if they deem fit, the actions of their agents and representatives ? The method by which the House of Lords can make the issue absolutely clear to the country, and so obtain that concentration for which we have pleaded, is quite simple. The so-called Veto Bill will come before the House of Lords on Monday. In effect, if not in so many words, the Lords will be told by the Government that if they will consent to pass the Veto Bill without amendment before the end of the week, there will be no Dissolution. The crisis will be automatically ended. If they will not pass it without amendment, then there will be a Dissolution.

In these circumstances, what should the Lords do ? Clearly they cannot pass the Bill, for it is single- Chamber government pure and simple, and they have not the slightest proof that the country—which has never been consulted on this matter—wishes for single-Chamber government. Instead, they have much evidence to the contrary. If, however, they throw the Bill out, then the appeal to the country will be made on a variety of issues,— upon the question of Tariff Reform v. Free-trade ; upon the old blunder of the Lords in throwing out the Budget of 1909 ; upon the demerits of the hereditary principle in legislation (the fact that it is the Commons who are not willing to reform the Lords by getting rid of the hereditary principle, while the Lords are willing, is being carefully concealed from the voters) ; and, finally, upon vague and alluring promises of future legislation. In our opinion, the way in which the Lords should meet this attempt to coerce them, and to secure under false pretences a new tenure of office for the Government, is as follows. Let the Lords promptly pass the Veto Bill through all its stages without amendment, though, of course, in the second- reading debate the demerits of the Bill should be faithfully set forth, and the alternative of true House of Lords' reform and the proper method of dealing with deadlocks indicated. But though the Lords should not take any responsibility for the Bill—which is radically bad—they should add to it a Referendum clause. Such a clause should be to the following effect :- " This Bill shall not come into operation until a poll of the people shall have been taken thereon in the manner set forth in the Schedule to this Bill, and unless at such poll of the people a majority of the persons voting shall have voted in favour of the said Bill being put into operation."

Within a period of — days after this Bill shall have received the Royal Assent, the. Crown shall issue writs to the Returning Officers in every Parliamentary constituency throughout the United Kingdom, directing such Returning Officers to hold in their constituencies a poll of the people under the Ballot Act, the Corrupt Practices Act, and other Acts governing Parliamentary elections in so fay as they are applicable, such poll to take place at a date named in the writ, but not earlier than the — day of , 1910, or later than the — day of —, 1910. At the said poll of the people all persons who are entitled to vote at Parlia- mentary elections shall be entitled to vote. The Returning Officer in each constituency shall name two persons to act as chief scrutineers at the counting of the votes, one of such persons to be a person known to be in favour of the Bill to which this Schedule is annexed coming into operation, and the other to be a person known to bo against the said Bill coming into operation. The two chief scrutineers shall each name one sub-scrutineer to act in each polling-station in like manner as the scrutineers appointed by Parliamentary candidates at Parliamentary elections. The Returning Officer shall cause a ballot-paper to be prepared in the following form, such ballot-paper to be issued to electors and used by them as at Parliamentary elections

The counting of the votes shall take place in like manner as does the counting of votes at a Parliamentary election, and the result of such counting, with the figures of the voting, shall be endorsed upon the writ and forthwith returned, as in the case of Parlia- mentary writs. Within a period of one week from the date fixed for the holding of the polls, the total votes given by the voters throughout the constituencies shall be counted at the Crown Office in London, and the total number of affirmative votes and the total number of negative votes polled be declared, under such regula- tions as shall be made jointly by the Speaker of the House of Commons, the Chairman of Committees in the House of Lords, and the Master of the Rolls. It shall be lawful for the Returning Officer at the close of the counting to make public the number of the votes given ' Yes' and of the votes given No' in the constituency in which he acts. If a majority of the electors voting are in favour of this Act coming into operation, such Act shall at once become law."

The Bill should then be sent down to the Commons, who could thereupon reject the Lords' addition or not as they chose. If the Commons were to accept this proposal, which, remember, they can perfectly well do without committing themselves to accepting the Referendum as a permanent addition to the Constitution, we should be able to obtain the authentic voice of the country on the question of single- Chamber government, isolated from other issues.

But we shall be told that there is not the slightest possi- bility of the Governmentaccepting this proposal for referring their Bill to the country. They will not, it will be urged, look at it for a moment, and will at once dissolve the House. Very well. In that case, though of course not so clearly, but still quite sufficiently, the "Lords will secure what it is their duty to secure,—that there shall be a plain. issue before the country, and that the electors, even if not in the most effective way, shall be asked whether they do or do not desire single-Chamber government. The Lords will have oiven us a single intelligible issue, and will have made it plain beyond all possibility of doubt that they are not attempting to gainsay the will of the people, but are merely taking precautions that the will of the people shall prevail, and that the people shall understand what they are being asked to agree to.

Elsewhere in our columns to-day we meet certain criticisms and arguments against the Referendum. Here we must content ourselves with the specific advice to the Lords to throw the onus of refusing to consult the people upon the Government and the House of Commons. They have an opportunity of showing that it is not they but the Government who are afraid to ask the people a plain question, and to let them decide it.

We are well aware of the arguments that the dislike of new and sensational methods will suggest to those to whom we tender the advice, and in a sense we sympathise with this dislike. The moment, however, is not one for punctilios of this sort, but for action. Finally, let us remind the Peers that it is not for them to say that the Government could not be expected to agree to such a proposition as ours at a moment's notice. To such an objection we must respectfully reply that it is not the business of the Lords to help the Government out of any difficulty to which their rashness and partisanship may have exposed them. If the Lords can by a straight blow from the shoulder embarrass their enemies, they have a perfect right to .deliver that blow.