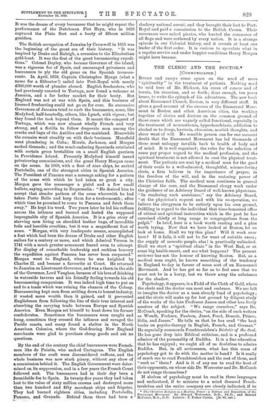 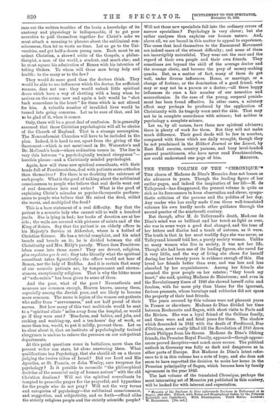 THE CLERIC AND THE DOCTOR..

Boors and essays come apace on the need of more " spirituality " in the treatment of patients. Nothing need be said here of Mr. Hickson, his cures of cancer and of hernia, his exorcism, and so forth ; time enough, ten years hence, to write the epitaph of his adventures. The new book about Emmanuel Church, Boston, is very different stuff. It gives a good account of the success of the Emmanuel Move- ment in Boston and other. American cities, the working together of clerics and doctors on the common ground of those cases which are vaguely called functional, especially in the treatment of neurasthenia, hypochondriasis, addiction to alcohol or to drugs, hysteria, obsession, morbid thoughts, and sheer want of will. No sensible person can for one moment doubt that the Emmanuel Movement has led thousands of these most unhappy invalids back to health of body and of mind. It is well organised ; the rules for the selection of cases pay proper regard to the medical profession, and the spiritual treatment is not allowed to oust the physical treat- ment. The patients are sent by a medical man for the good of their souls to a well-educated, thoughtful, science-loving cleric, a firm believer in the importance of prayer, in the freedom of the will, and in the restoring power of the Christian faith. The medical man continues in general charge of the case, and the Emmanuel clergy work under the guidance of an Advisory Board of well-known physicians. "In rendering such assistance," say the Advisory Board, "at the physician's request and with his co-operation, we believe the clergyman to be entirely upon his own ground, fulfilling in regard to the individual that time-honoured office of ethical and spiritual instruction which in the past he has exercised chiefly at long range to congregations from the pulpit." In brief, here is a book worth reading and a plan worth trying. Now that we have looked at Boston, let us look at home. Shall we try this plan ? Will it work over here ? If it fails, it will not be for want of suitable cases ; the supply of neurotic people, alas ! is practically unlimited. Shall we start a "spiritual clinic" in the West End, or at some big health-resort, and see what happens ? The present reviewer has not the honour of knowing Boston. But, as a medical man ought, he knows something of the tendency in England to-day in favour of some sort of an Emmanuel Movement. And he has got so far as to feel sure that wo must not be in a hurry, lest we throw away the substance for the shadow.

Psychology, it appears, is a Field of the Cloth of Gold, where the cleric and the doctor can meet and embrace. We are left to imagine the doctor as a man already fond of psychology ; and the cleric will make up for lost ground by diligent study of the works of the late Professor James and other less lively masters of the subject. " We range ourselves," says Dr. McComb, speaking for the clerics, "on the side of such writers as Wundt, Fechner, Paulsen, Janet, Forel, Dessoir, Prince, Sidis, and James." He tells us that he has read "the best books on psycho-therapy in English, French, and German." He especially commends Feuchtersleben's Dietetic of the Soul. He has gone deep into Biblical criticism, and is a profound admirer of the personality of Buddha. It is a fine education that he has enjoyed ; we ought all of us doubtless to admire Buddha. But, in all seriousness, what has this mass of psychology got to do with the matter in hand ? Is it really of much use to read Feuchtereleben and the rest of them, and "such as " them? And is it of any use to read the host of their opponents, on whose side Dr. Worcester and Dr. McComb do not range themselves ?

If shelves of psychology must be read in three languages and understood, if to minister to a. mind diseased Fetich- tersleben and the entire company are clearly indicated, if to

• The Christian Religion as a Healing Power a Defence and Exposition of the Emmanuel Movement. By Elwood Worcester, D.D., Ph.D., and Samuel

raze out the written troubles of the brain a knowledge of its anatomy and physiology is indispensable, if to get poor neurotics to pull themselves together for Christ's sake we must attach a meaning to phrases about the subliminal con- sciousness, then let us waste no time. Let us go to the Uni- versities, and get half-a-dozen young men. Each must be an ardent Christian, a shrewd critic of the Gospels, a philan- thropist, a man of the world, a student, and much else; and he must square his admiration of Renan with his intention of taking Orders. To whom will these men bring help and health : to the many or to the few P

They would do more good than the doctors think. They would be able to use influences which the doctor, for sufficient reasons, does not use : they would unlock little spiritual doors which have a way of shutting with a bang when he arrives on the scene ; now and again a bolt would be " shot back somewhere in the heart" for them which is not stirred for him. A valuable number of invalided lives would be turned into going concerns. Let us be sure of that, and let as be glad of it, when it comes.

Only, there will be a great deal of confusion. It is generally assumed that these Christian psychologists will all be clerics of the Church of England. That is a strange assumption. The Nonconformist Churches will have to be included in the plan. Indeed, it is hard to see, apart from the giving of the Sacrament—which is not mentioned in Dr. Worcester's and Dr. McComb's book—where ordination comes in. The line is very thin between " a psychologically trained clergyman "- horrible phrase—and a Chrietianly minded psychologist.

Again, how will these new spiritual consultants, with their heads full of Feuchtersleben, deal with patients more orthodox than themselves ? For there is no doubting the existence of such people. What is the good of talking about the subliminal consciousness to people who believe that real devils went out of real demoniacs into real swine P What is the good of explaining Christ's miracles as psycho-therapeutic perform- ances to people who believe that He raised the dead, stilled the waves, and multiplied the food?

This is a bare statement of a real difficulty. Say that the patient is a neurotic lady who cannot will to walk a hundred yards. She is lying in bed; her books of devotion are at her side ; the walls are covered with pictures of saints and of the King of Saints. Say that the patient is an elderly officer in his Majesty's Service at Aldershot, where is a hotbed of Christian Science. He has a trivial complaint, and his mind broods and breeds on it; he is divided between the old Christianity and Mrs. Eddy's parody. Where does Feuchters- leben come into these cases ? They are devout, religious, plus royalistes que le rot ; they take literally what the spiritual consultant takes figuratively ; the officer would not hear of Renan, nor the lady of Buddha. And it is certain that many of our neurotic patients are, by temperament and circum- stances, exceptionally religious. That is why the bitter name of " sofa-saints " has been given to some of them.

And the poor, what of the poor ? Neurasthenia and neuroses are common enough, Heaven knows, among them, especially among the Jewish poor, and are likely to become more common. The name is legion of the women out-patients who suffer from "nervousness," and are half proud of their nerves. But how many of this vast multitude would be sent to a "spiritual clinic" miles away from the hospital, or would go if they were sent ? 'Bus-fares, and babies, and jobs, and cooking and washing-up, and a ten-hours' day of work, or more than ten, would, to put it mildly, prevent them. Let us be clear about it, that an institute of psychologically trained clergymen is useless to relieve the pressure on our out-patient departments.

At this point questions come in battalions, more than the present writer can state, let alone answering them. What qualifications has Psychology, that she should sit on a throne judging the twelve tribes of Israel? Did our Lord and His Apostles, or St. Francis, or John Wesley, care twopence for psychology ? Is it possible to reconcile " the philosophical doctrine of the essential unity of human nature" with the old Christian dualism ? Will not the spiritual consultants be tempted to prescribe prayer for the prayerful, and hypnotism for the people who do not pray ? Will not the very terms and categories of psychology—the subliminal consciousness, and suggestion, and subjectivity, and so forth—offend alike the strictly religious people and the strictly scientific people?

Will not these new specialists fall into the ordinary errors of narrow specialism P Psychology is very clever; but she rather analyses than explains our human nature. And, above all, we are bound in this matter to appeal to experience. The cases that lend themselves to the Emmanuel Movement are indeed cases of the utmost difficulty; and some of them are incorrigibly untruthful. They wear out the care and the regard of their own people and their own friends. They sometimes are beyond the skill of the average doctor and the average cleric, and become the prey of money-making quacks. But, as a matter of fact, many of them do - get well, under diverse influences. Home, or marriage, .or _a change of fortune, or the domination of a good friend, who may or may not be a parson or a. doctor,—all these happy influences do cure a fair number of our neurotics and neurasthenics. In the case of the young, corporal punish- ment has been found effective. In other cases, a salutary effect may perhaps be produced by the application of Christianity with its tragedy worn next the skin. That may not be in complete accordance with science; but neither is psychology a complete science.

Let us, by all means, have these new spiritual advisers; there is plenty of work for them. But they will not make much difference. Their good deeds will be few in number, compared with those which are daily wrought, though they be not proclaimed in the Hibbert Journal or the Lancet, by East End curates, country parsons, and busy level-headed general practitioners, who have never read Feuchtersleben,

nor could understand one page of him. Municus.