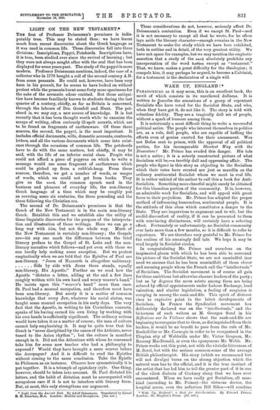 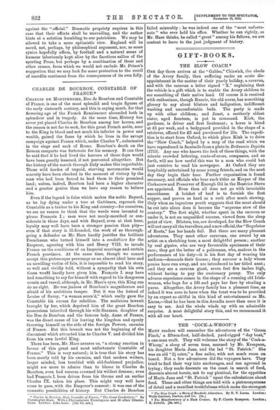 PARADOXICAL as it may seem, this is an excellent book, the merit of which consists in its unrelieved dullness. It is written to describe the sensations of a group of repentant Socialists wino have voted for the Socialist State, and who, when they have got it, do not like it. The story is told with relentless fidelity. They are a tragically dull set of people, without a spark of humour among them.

It is notoriously a most difficult thing to write a successful political satire. The people who interest themselves in politics are, as a rule, dull people, who are capable of baffling the efforts even of genius exerted for their amusement. Was not Defoe sent to prison, with the approval of all political parties, for his incomparable Shortest Way with the Dissenters? Mr. Prince has evaded this danger. His tale is not a 'satire ; it is a soberly constructed picture of what Socialism will be,—a terribly dull and oppressing affair. The people who figure in this story as objecting to the Socialism which their votes have created are just as maudlin as the ordinary sentimental Socialist whom we meet in real life. It is rather unkind of the author to call this a book for Anti- Socialists. Something more cheerful might surely be obtained for this blameless portion of the community. It is, however, an admirable work for Socialists, and will appeal with great force to their prejudices. Mr. Prince has adopted the proper method of influencing humourless, sentimental people. It is the attitude of this class which constitutes a danger to the State. They are impervious to argument and to wit, but the sordid discomfort of reality, if it can be presented to them with convincing distinctness, will certainly have a sobering effect. Fortunately or unfortunately, no Socialist community ever lasts more than a few months, so it is difficult to refer to experience. We are therefore very grateful to Mr. Prince for the realism of his amazingly dull tale. We hope it may be read largely in Socialist circles.

In congratulating Mr. Prince and ourselves on the inspissated gloom with which he has been able to surround his picture of the Socialist State, we are not unmindful (nor need we assume that he has been unmindful) of those clever and amusing people whom the French call the " intellectuals " of Socialism. The Socialist movement is of course all gain for these ambitious but otherwise obscure leaders of the party ; but as by degrees the more astute among them are being solaced by official appointments under Labour Exchange, land valuation, and similar legislation, a feeling of suspicion is creeping in among the rank-and-file. This spirit of distrust rises to explosive point in the latest developments of Socialism. In France the Syndicalist movement has deliberately declared war on the "intellectuals," and the bitterness of such writers as M. Georges Sorel in his Ileylexions sur la Violence shows that the rank-and-file are beginning to recognise that to them, as distinguished from their leaders, it would be no benefit to pass from the rule of Mr. Rockefeller or Mr. Carnegie in order to be reorganised in the Utopian city of Webbville under Mr. Victor Grayson, Mr. Ramsay MacDonald, or even the eponymous Mr. Webb. Mr. Prince works out this point, not with the vitriolic bitterness of M. Sorel, but with the serious common-sense of the average British philanthropist. His story (which we recommend but will not divulge) turns on the strong objection which the natural man has to the official, and it is the true instinct of the artist that has led him to tell the greater part of it in one of the vilest dialects of Cockney slang that we have ever encountered. When we have really got Socialism, all man- kind (according to Mr. Prince)—the virtuous doctor, the hospital nurse, even the nefarious Bill Sikes—will combine

against the "official." Dramatic propriety requires in this case that their efforts shall be unavailing, and the author hints at a solution humbling to our patriotism. We may be allowed to take a more optimistic view. England will be saved, not, perhaps, by philosophical argument, nor, as some cynics hopefully affirm, by football and a natural sense of humour laboriously kept alive by the facetious sallies of the sporting Press, but perhaps by a combination of these and other causes, from which we would not exclude Mr. Prince's suggestion that we may look for some protection to the recoil of maudlin sentiment from the consequences of its own folly.