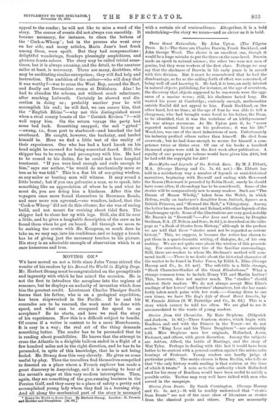 Hero - Myths and Legends of the British Race. By M. J.

Ebbutt, M.A. (George Hama) and Co. 7s. 6d. net.)—Mr. Ebbutt has told in a satisfactory way a number of legends or semi-historical narratives, beginning with Beowulf and ending with Hereward the Saxon (Hereward is preceded by Robin Hood; surely he should have come after, if chronology has to be considered). Some of the stories will be comparatively new to many readers. Such are " The Dream of Kasen Wledig," taken from the Welsh, in which Helena, really an innkeeper's daughter from Antioch, figures as a. British Princess, and "Howard the Halt," a Viking story. Among the better known are Havelok and Roland, with other legends of the Charlemagne cycle. Some of the illustrations are very good, notably Mr. Bacon's in "Beowulf."—For Love and Honour, by Douglas Stedman, B.A. (T.Nelson and Sons, 3s.6d.), is described on the title- page as " a Book of Stories from History," although in the preface we are told that these "stories must not be regarded as serious history." This, we suppose, is because the writer has chosen to put them in a quasi-dramatic setting, of dialogue, &c., of his own making. We are not quite sure about the wisdom of this proceed- ing. For ourselves, we never tire of the familiar surroundings. Still, there are readers to whom Mr. Stedman's method will com- mend itself.—There is no doubt about the historical character of the matter to be found in Tudor Times, by Edith L. Elias (George Harrap and Co., 2s. 6d. net). The sub-title is a little strange, " Short Character-Studies of the Great Elizabethans." What a strange common term to include Henry VII. and Martin Luther ! This, however, does not matter much. The " studies " should interest their readers. We do not always accept Miss Elias's readings of her heroes' and heroines' characters, but she has mani- festly taken much pains with her work.—Coming down to our own times, we have The Boy's Life of Great Heart Lincoln, by W. Francis Aitken (S. W. Partridge and Co., 2s. 6d.) This is a story which cannot be told too often. We are glad to see it accommodated to the wants of young readers.