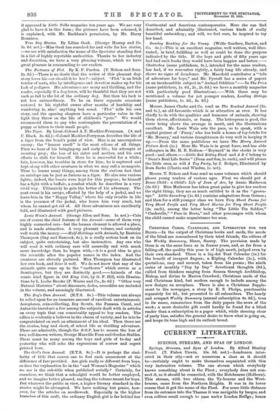 Black. 3s. 6d.) —Colonel Mockler-Ferryman describes the life of a tiger from the beast's point of view. Man is an unscrupulous enemy; the "human smell" is the most odious of all things. First we hear of his bringing-up and early life ; his attempts at securing prey; the loss of his sister and mother, and his own efforts to shift for himself. Here he is successful for a while ; fate, however, has troubles in store for him; he is captured and kept along with other creatures in what we may call a menagerie. Thus he learns many things, among thorn the curious fact that an antelope can be just as furious as a tiger. He also sees various fights; indeed, the beasts were kept for this purpose ; he himself has a fight with a buffalo, a combat which ho describes in a very vivid way. Ultimately he gets the better of his adversary. The next event is his escape, effected by the help of a jackal, and we leave him in the " Happy Valley," where his only trouble in life is the presence of the jackal, who bores him very much, but whom he cannot get rid of. All these adventures are excellently told, and illustrated with good pictures.