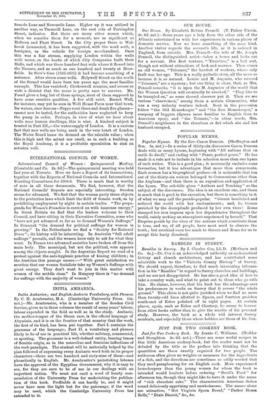 Our House. By Elizabeth Robins Pennell. (T. Fisher Unwin. 4s. 6d. net.)—Some years ago a lady from the other side of the Atlantic entertained us with her experiences in various places of domestic service. Now we have something of the same kind. Another visitor regards the servant's life, as it is Ordered in England, from outside. Mrs. Pennell—tho wife of Mr. Joseph Pennell, the distinguished artist—takes a house and looks out for a servant. Her first venture, " 'Enrietter," is a bad sort, though not without attractions of look and manner. Then comes an old woman, "Trimmer," the hardest of workers, whose only fault was her age. This is a really pathetic story, all the more so because it is so natural. Louise and M. Auguste, who succeed "Trimmer," are a mystery ; but one thing is clear, that, as Mrs. Pennell remarks, "it is upon the M. Augustes of the world that the Woman Question will eventually be wrecked." "They like to be trampled on," as some shrewd observer put it. Then we see various " charwomen," among them a certain Clementine, whe was a very unlucky venture indeed. Next in the procession follow "the Old Housekeeper" and "the New Housekeeper," a company of beggars (figures more familiar to English than to American eyes), and " the Tenants,"—in other words, Mrs. Pennell's neighbours in the chambers or flat which she and her husband occupied.