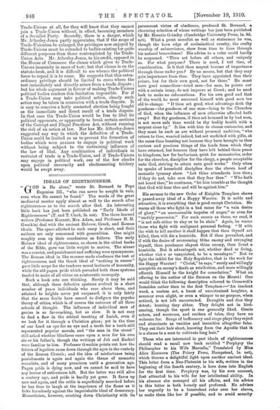 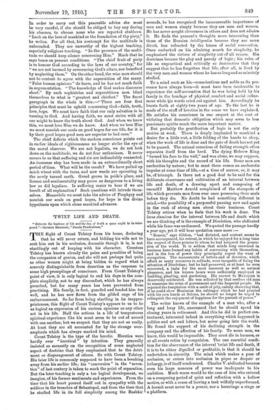 Eugenius III., "who can never be sought in vain, even when He cannot be found." The words of the great mediaeval mentor apply almost as well to the search after righteousness as to the search after God. An interesting little book has just been published on " Early Ideals of Righteousness" (T. and T. Clark, 3s. net). The three learned writers (Professor Kennett, Mrs. Adam, and Professor H. M. Gwatkin) deal with the ancient Hebrew, Greek, and Roman ideals. The space allotted to each essay is short, and their authors are only concerned with generalities. One might roughly sum up their conclusions as follows. The early Hebrew ideal of righteousness, as shown in the oldest books of the Bible, gave too little weight to motive. The sinner was a convict, and punishment and suffering were synonymous. The Roman ideal in like manner made obedience the test of righteousness, and the Greek ideal of "nothing in excess" gave little scope for the tenderer moral instincts of humanity, while the old pagan pride which pervaded both these systems tended to make of all virtue an aristocratic monopoly.

Such a book sets one thinking. Surely it may be said that, although these defective systems evolved in a short number of years individuals who rose above them, and attained to heights never yet surpassed, it is only lately that the same faults have ceased to disfigure the popular theory of ethics, which is of course the outcome of all three schools of thought. The influence of individual men of genius is so far-reaching, but so slow. It is not easy to find a flaw in the ethical teaching of Isaiah, even if we look for it through a Christian glass ; yet in the time of our Lord an eye for an eye and a tooth for a tooth still represented popular morals, and "the man in the street" still asked whether blindness came upon a man for his own sin or his father's, though the writings of Job and Ezekiel were familiar to him. Professor Gwatkin points out how the fetters of legalism came down through the ages in the custody of the Roman Church ; and the idea of misfortunes being punishments is again and again the theme of monastic moralists, and of many preachers until a generation ago. Pagan pride is dying now, and we cannot be said to have any horror of enthusiasm left. But the latter was still alive a century ago, and pride is hardly yet gone. It flares up now and again, and the critic is superficially scorched before be has time to laugh at the impotence of the flame as it licks harmlessly against the imperishable ideal of democracy. Monasticism, however, crushing down Christianity with its paramount virtue of obedience, produced St. Bernard, a charming selection of whose writings has just been published by Mr. Horatio Grimley (Cambridge University Press, ls. 6d. net). What a great moralist as well as statesman he was, though the keen edge of ecclesiastical cruelty, the crafty worship of subservience, show from time to time through his natural benevolence! His advice to a ruler could hardly be surpassed. " Thou art before all others, and uniquely so. For what purpose P There is need, I tell thee, of consideration. Is it that thou mayest become of importance through those under you P By no means, but that they may gain importance from thee. They have appointed thee their prince, but for their own good, not for thine." He must have good counsellors—tried men—for men, he points out with a certain irony, do not improve at Court; and he need look to make no reformations. For his own good and that of the world, he must surround himself with good men too old to change. " If thou. art good, what advantage cloth thy goodness—the goodness of one man—bring to the Churches of God, when the influence of men otherwise affected bath sway? But thy goodness, if thou art hemmed in by bad men, is not more safe than would be thy bodily health with a serpent close by." It lies with him to choose emissaries, and they must be such as are without personal ambition, " who return to thee, wearied indeed, but not surfeited with gifts, at the same time boasting not because they have brought to thee curious and precious things of the lands from which they have returned, but because they have left behind them peace to kingdoms, law for barbarians, quiet for monasteries, order for the churches, discipline for the clergy, a people acceptable unto God, striving to attain unto good works." Only when he speaks of household discipline does the cloven hoof of monastic tyranny show. "Let thine attendants love thee ; if they do not, take care that they fear thee." " Who hath not heard thee," be continues, "let him tremble at the thought that God will hear thee and will be against him."

His sermon to the new Order of Knights Templars shows a passed-away ideal of a Happy Warrior. It is noble and attractive, it is everything that is good except Christian. He warns all those who fight in a bad cause for " a vain desire of glory," " an unreasonable impulse of anger," or even for "earthly possession." For such causes as these, we read, it "is not safe either to slay or to be slain." Again, he warns those who fight with malignant personal feeling. "If with the wish to kill another it shall happen that thou thyself art killed, thou wilt die a homicide. But if thou prevailest, and if with the desire of overcoming thine enemy and revenging thyself, thou perchance slayest thine enemy, thou livest a homicide. But it advantageth not, whether dead or living, whether victor or vanquished, to be a manslayer." But to fight the infidel for the Holy Sepulchre, that is the work for the Happy Warrior I " Christ," he says, " surely and willingly accepteth an enemy's death as retribution, and more willingly offereth Himself to the knight for consolation." What an offering to the author of the Sermon on the Mount! One would think the following description referred to Cromwell's Ironsides rather than to the first Templars :—"An insolent word, a useless act, a burst of unrestrained laughter, a murmur even slight, or even a whisper to no purpose, when noticed, is not left uncorrected. Draughts and dice they detest; hunting they abhor. They delight not in bird- snaring, though the sport is one generally liked. Comic) actors, and sorcerers, and reciters of tales, they have no welcome for. Songs of buffoonery and stage-plays they reject and abominate as vanities and insanities altogether false. They cut their hair short, knowing from the Apostle that it is a shame to a man to cultivate long hair."

Those who are interested in past ideals of righteousness should read a small new book entitled " Porphyry the Philosopher to his Wife Marcella," Translated by Miss Alice Zimmern (The Priory Press, Hampstead, Is. net), which throws a delightful light upon another ancient ideal. This letter from a Neo-Platonist to his wife, written in the beginning of the fourth century, is here done into English for the first time. Porphyry was, by his own account, first attracted to his wife for her intellectual ability. In his absence she managed all his affairs, and his advice in this letter is both homely and profound. He advises her urgently to be a benevolent ruler over her slaves, to make them like her if possible, and to avoid severity-

In order to carry out this peaceable advice she must be very careful, if she should be obliged to buy any during his absence, to choose none who are reported stubborn. "Look on the love of mankind as the foundation of thy piety," he writes. For all that, his contempt for the multitude is unbounded. They are unworthy of the highest teaching, especially religious teaching. " In the presence of the multi- tude we should keep silence concerning Him." Much that he says bears on present conditions. "The chief fruit of piety is to honour God according to the laws of our country," for "we are not harmed by reverencing God's altars, nor benefited by neglecting them." On the other hand, the wise man should not be content to agree with the superstition of the many. "False human opinions" do harm, and he has not much faith in argumentation. " The knowledge of God makes discourse short." By such sophistries and superstitions men blind themselves to what is " greatest and chiefest." The finest paragraph in the whole is this :—" There are four first principles that must be upheld concerning God—faith, truth, love, hope. We must have faith that our only salvation is in turning to God. And having faith, we must strive with all our might to know the truth about God. And when we know this, we must love Him we do know. And when we love Him we must nourish our souls on good hopes for our life, for it is by their good hopes good men are superior to bad ones."

The chief defects which the modern conscience points out in earlier ideals of righteousness no longer strike the eye of the moral observer. We are not legalists, we do not look down on the multitude, we do not fear enthusiasm. It never occurs to us that suffering and sin are indissolubly connected. An immense step has been made in an extraordinarily short period of time. What will be the result ? We have pulled up much wheat with the tares, and new weeds are sprouting in the newly turned earth. Greed grows in pride's place, and license and sentimentality may prove as dangerous to a living law as did legalism. Is suffering easier to bear if we are bereft of all explanation ? Such questions will intrude them- selves. Meanwhile we must take the advice of Porphyry and nourish our souls on good hopes, for hope is the divine hypothesis upon which alone mankind advances.