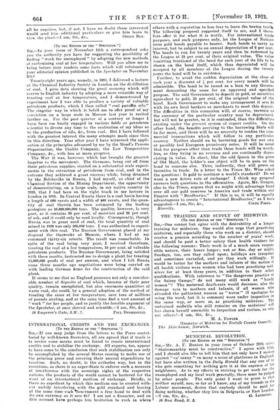 of November 12th a correspondent asks you the authority you have for suggesting the possibility of finding " work for unemployed " by adopting the new methods of carbonizing coal at low temperature. Will you allow me to bring before your readers some facts which will substantiate your editorial opinion published in the Spectator on November 5th?

Twenty-eight years ago, namely, in 1893, I delivered a lecture at the Chemical Industry Society in London on the distillation of coal. I gave data showing the great economy which will accrue to English industry by adopting a more scientific way of treating coal at low temperature, and 1 demonstrated by experiment how I was able to produce a variety of valuable petroleum products, which I then called " coal paraffin oils." The singular way in which it befell me to offer proof of my conviction on a large scale in Moscow last year is recited further on. For the past quarter of a century or longer I have been too busily engaged in various fields as petroleum scientist to devote any time to the realization of my ideas as to the production of oils, &c., from coal. But I have followed with the greatest interest the many attempts made since then in this direction. Year after year I have witnessed the appli- cation of the principles advanced by me by the Mond's Process Organization, the Coalite Company, the Low Temperature Company, &c., with less or more progress.

The War it was, however, which has brought the greatest impetus to the movement. The Germans, being cut off from their petroleum supplies, started on a substantial scale experi- ments in the extraction of petroleum from coal, and in the outcome they achieved a great success; while, being detained by the Bolsheviks in Russia, I bad myself, as chief of the Chemical Section of the Mining Department, the opportunity of demonstrating, on a large scale, in my native country in 1920, that I had been on the right track in my lecture in London in 1893. In Central Russia there is a coal basin having a length of 600 versts and a width of 400 versts, and the quan- tity of coal therein has been estimated by the leading geologists as 10,000,000,000 tons. The quality, however, is very poor, as it contains 30 per cent. of moisture and 20 per cent. of ash, and it could only be used locally. Consequently, though Russia was in great need of coal, the total quantity of coal mined in 1920 was only 500,000 tons. I was authorized to experi- mint with -this coal. The Russian Government placed at my disposal the Gasworks at Moscow, where I had at any command thirty-six retorts. The result was remarkable. In spite of the coal being very poor, I received therefrom, treating the coal at a low temperature, 10 per cent. of valuable petroleum products. The Russian Government, being satisfied with these results, instructed me to design a plant for treating 15,000,000 poods of coal per annum, and when I left Russia some three months ago negotiations were being carried on with leading German firms for the construction of the said plant.

It seems to me that as England possesses not only a consider- able number of deposits of coal which, because of their poor quality, remain unexploited, but also enormous quantities of waste coal, she could, by a general adoption of the method of treating the same at low temperature, save tens of millions of pounds sterling, and at the same time find a vast amount of " work " for her people, and so justify the forcible argument of the Spectator, at once shrewd and scientific.—I am, Sir, &c.,