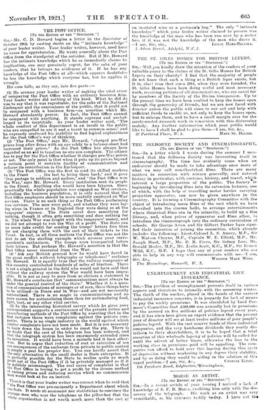 [To THE EDITOR OF THE " SPECTATOR."' SIR,—Tho problem of unemployment presents itself in various aspects and threatens to intensify. with the oncoming winter.. The thrift of the worker, placed in the hands of the various industrial insurance concerns, is in jeopardy for lack of means to pay the weekly premiums. It was elucidated by Lord Par- moor's Committee that £500,000 was annually lost in premiums by the assured on five millions of policies lapsed every year, and it has since been given on expert evidence that the present year of disaster will see at least twelve millions of poor people's policies lapsed. With the vast reserve funds of these industrial companies, and the very handsome dividends they yearly dis- tribute to their shareholders, it is to ho hoped that a total cessation of this wholesale lapsing of policies will be called for until the advent of better times, otherwise the loss to the working class in premiums paid will be appalling. The com- panies can afford to hold over this lapsing during this cycle of depression without weakening in any degree their stability. and by so doing they would be aiding in the solution of this vexed problem.—I am, Sir, dic., CHARLES ELTON. 756 Pcrshore Rood, Edybuston,13irmingham,