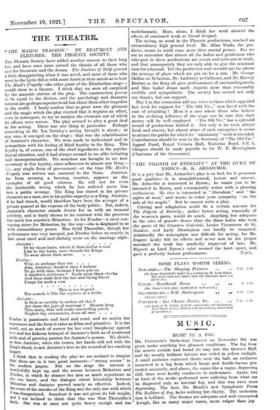 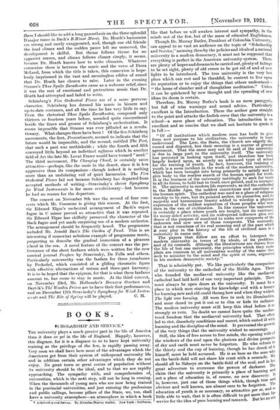 MUSIC IN A FOG.

Mn. Goossess's Orchestral Concert on November 0th wai given under anything but pleasant conditions. The fog from the streets outside had found its way into the Queen's Hall, and the usually brilliant interior was veiled in yellow twilight. A small audience scattered thinly over the hall, an orchestra immersed in a fog from which harps and double-basses pro. truded uncannily, and above, the organ like a vague, depressing cliff, these were hardly conducive to enthusiasm. Again, two at least of the works performed were suffering from what can be diagnosed only as internal fog, and this was oven moll depressing. The first, Dr. Heath's new Symphonic PM* .The Builders of Joy, lacks nothing but clarity. The orchestra- tion is brilliant. The themes are adequate and well contrasted hough, like so many major tunes, more vulgar than joy

(here I should like to add a long parenthesis on the three splendid D major tunes in Bach's B Minor Mass). Dr. Heath's harmonies are strong and rarely exaggerated, and, though our old friends the loud climax and the sudden pause left me unmoved, the development is skilful. But theme follows theme for no apparent reason, and climax follows climax simply, it seems, because Dr. Heath knows how to write climaxes. Whatever connexion there is between the music and the verse of Fiona McLeod, from which the title is taken, this connexion is hope- lessly imprisoned in the vast and meaningless edifice of sound that Dr. Heath has chosen to raise. Later in the evening Strauss's Thus Spake Zarathustra came as a welcome relief, since it was the sort of emotional and pretentious music that Dr. Heath had attempted and failed to write.

Schonberg's Five Orchestral Pieces are of a more perverse character. Schonberg has dressed his music in bizarre and up-to-date costumes, and all the time he has very little to say. Even the rhetorical Thus Spake Zarathustra, composed only thirteen or fourteen years before, sounded quite conventional beside the fizzes and groans of Schtinberg's orchestration. It seems impossible that Strauss was ever pilloried as a revolu- tionary. What changes there have been ! Of the five Schonberg movements, the first, Presentiments, seemed to indicate that the future would be impossible, and the second, entitled The Past, that such a past was unthinkable ; while the fourth and fifth conveyed little beyond an indistinct ugliness which in another field of Art the late Mr. Lovat Fraser would have termed " mud." The third movement, The Changing Chord, is certainly more attractive—perhaps, like the oasis in the desert, since it is less aggressive than its companions—though indeed it is nothing more than an undulating veil of quiet harmonies. The Five Orchestral Pieces fail not because Schonberg has departed from accepted methods of writing—Stravinsky's clever Symphony for Wind Instruments is far more revolutionary—but because he had no reason for the departure.

The concert on November 9th was the second of four con- certs which Mr. Goossens is giving this season. At the first, Sir Edward Elgar's 'orchestral arrangement of Bach's organ fugue in C minor proved so attractive that it was repeated. Sir Edward Elgar has skilfully preserved the character of the Bach fugue and yet made surprising use of a modem orchestra. The arrangement should be frequently heard. The programme included Mr. Arnold Bax's The Garden of Fond. This is an interesting if somewhat nebulous example of programme music, purporting to describe the gradual immersion of a pleasure island in the sea. A novel feature of the concert was the per- formance of the short fanfares which were written for the new musical journal Fanfare by Stravinsky, De Falla and others. Particularly noteworthy was the fanfare for three trombones by Prokofief, which consisted of a gliding chromatic figure with effective alternations of unison and three-part harmony. It is to be hoped that the epigram, for that is what these fanfares amount to, has come to stay in music. At the third concert, on November 23rd, Mr. Holbrooke's Bronwen Overture and Bartok's The. Wooden Prince are to have their first performances, end on December 12th Stravinsky's Symphony for Wind Instru- ments and The Rite of Spring will be played. C. IL