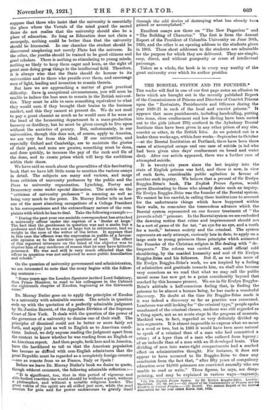 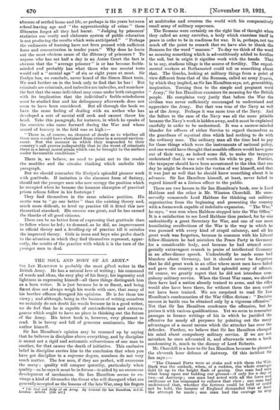 THE BORSTAL SYSTEM AND ITS FOUNDER.* Tire reader will find

in one of our first page notes an allusion to facts which are brought out in the recently published Report of the Commissioners of Prisons and Directors of Convict Prisons upon the " Restraints, Punishments and Offences during the year 1920-21 in each of the local and convict prisons." It appears that more punishments, including handcuffing, putting into irons, close confinement and low dieting have been meted out to the girls (about 270) confined in the Aylesbury Borstal Institute than have been given in any other prison of any size, convict or other, in the British Isles. As we pointed out in a leader three weeks ago, withinfour weeks—September to October —at the Borstal Institution at Portland, there have been three cases of attempted escape and one case of suicide (a lad who had been given nine days' confinement on bread and water diet). After our article appeared, there was a further case of attempted suicide.

It is twenty-six years sine. the last inquiry into the state of English prisons was held, and there is now, in view of such facts, considerable public agitation in favour of another suoh inquiry. We believe that a perusal of Sir Evelyn Ruggles-Brise's book, The English Prison System, would prove illuminating to those who already desire such an inquiry. Sir Evelyn Ruggles-Brice was the founder of the Borstal system. We cannot be too careful, in calling these institutions to account for the unfortunate things which have happened within their walls, to remember the tremendous advance which the Borstal system represented on our former treatment of " the juvenile adult " prisoner. In the Borstal system we see embodied the dawning notion that crime and imprisonment should not be a sort of game of tit for tat, " an eye for an eye, and a tooth for a tooth," between society and the criminal. The system represents an early attempt, curiously late in date, to apply on a large scale to young prisoners those principles which animated the Founder of the Christian religion in His dealing with " de- linquents." The reform was carried out, amid official cold shouldering, by the unaided humanity and zeal of Sir Evelyn Ruggles-Brice and his followers. But if, as we learn more of Sir Evelyn Ruggles-Briso's work, we are inspired by a feeling of admiration and gratitude towards him, we shall also become very conscious as we read that what we may call the public moral sense has now got to a point considerably beyond that reached by this humane pioneer. We see in Sir Evelyn Ruggles- Thise's attitude a half-conscious feeling that, in finding the Prisoner to be almost a human being, he has made a wonderful discovery. No doubt at the time Sir Ruggles-Brise made it

it was indeed a discovery so far as practice was concerned. Lombroso was still looking for " the criminal typo," people spoke unashamed of the criminal classes, madness was still regarded as a thing apart, not as an acute stage in the progress of neurosis. Mankind was, in fact, regarded as very definitely divided up into segments. It is almost impossible to express what we mean in a word or two, but in 1895 it would have been more natural to speak of a criminal than of a man who had committed a crime ; of a leper than of a man who suffered from leprosy ; of an imbecile than of a man with an ill-developed brain. This dividing of men into water-tight compartments had a marked effect on administrative thought. For instance, it does not appear to have occurred to Sir Ruggles-Brice to draw any conclusion from the fact that, " after fifty years of compulsory education over 18,000 prisoners are convicted annually who are unable to read or write." These figures, he says, are disap- pointing, and may be explained in various ways—vagrancy,

• (1) The English Prison System. By Sir Evelyn Ruggles-Brim London: Macmillan. 17e. Od. net.)—(2) Re of the Commissioners of Prisons and MS Directors of Convict Prisons.—(3) f.gal. The Annual Report of the Borstal Assoclation for the year ended March Slit, 1921.

absence of settled home and life, or perhaps in the years between school-leaving age and " the apprenticeship of crime " these illiterates forgot all they had learnt. " Judging by prisoners' statistics our costly and elaborate system of public education is not producing the results which were anticipated." " Perhaps the rudiments of learning have not been pressed with sufficient force and concentration in tender years." Why does he leave out the most obvious cause of the illiteracy of prisoners To anyone who has sat half a day in an Assize Court the fact is obvious that the " average prisoner " is or has become feeble- minded and probably has what those who use mental tests would call a " mental age " of six or eight years at most. Sir Evelyn has, we conclude, never heard of the Simon Binet tests. We read further on in the book only to find that he has ! But criminals are criminals, and imbeciles are imbeciles, and somehow the fact that the same individual may come under both categories with its implication that the individual's feeble-mindedness must be studied first and his delinquency afterwards does not seem to have been considered. But all through the book we have the same feeling of dealing with an author who has developed a sort of mental stiff neck and cannot throw his Lead. Take this paragraph, for instance, in which he speaks of the convicts who came forward during the War and whose record of bravery in the field was so high :- "There is, of course, an element of doubt as to whether all these men would have abstained from crime in a normal environ- ment. But the manner in which they responded to their country's call proves indisputably that in the worst of criminals there is a latent moral strain which can be brought to the surface under favourable conditions."

There is, wo believe, no need to point out to the reader the muddles and the circular thinking which underlie this paragraph.

But we should remember Sir Evelyn's splendid pioneer work with gratitude. If imitation is the sincerest form of flattery, should not the younger men who now occupy the position which

he occupied when he became the humane champion of practical prison reform follow in his footsteps ?

They find themselves in the same relative position. His motto was to " go one better " than the existing theory and, much more difficult, to level up practice till it fitted this new theoretical standard. His success was great, and he has earned the thanks of all good citizens.

- There can be no better form of expressing that gratitude than to follow where he led ; to demand, as he did, an improvement in official theory and a levelling-up of practice till it satisfies the improved theory. Girls in irons and boys who prefer death to the situation in which they find themselves represent, appar- ently, the results of the practice with which it is the turn of the younger men to deal.