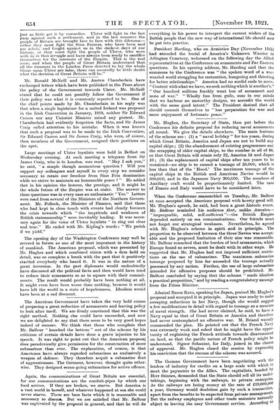 and accepted it in principle. Japan was ready to make sweeping reductions in her Navy, though she would suggest a few modifications in detail with regard to tonnage as a measure of naval strength. She had never claimed, he said, to have a Navy equal to that of Great Britain or America and therefore had never contemplated an offensive war. M. Briand warmly commended the plan. He pointed out that the French Navy was extremely weak and asked that he might have the oppor- tunity of explaining the French attitude towards disarmament on land, so that the pacific nature of French policy might be understood. Signor Schemer, for Italy, joined in the chorus of approval. Mr. Hughes closed the session by expressing his conviction that the success of the scheme was assured.