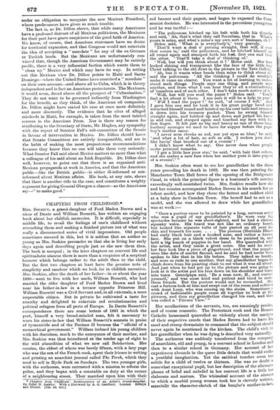 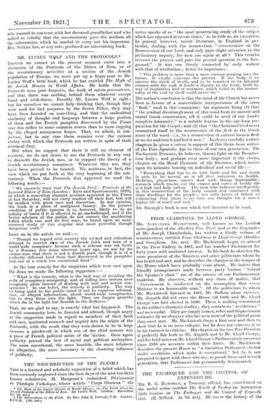 MRS. Scarier., a grand-daughter of Ford Mados Brown and a niece of Dante and William Rossetti, has written an engaging book about her childish memories. It is difficult, especially in middle life, to recall the feelings of one's childhood without retouching them and making a finished picture out of what was really a disconnected series of vivid impressions. Old people sometimes succeed in this, but it is seldom that an author so young as Mrs. Soskice persuades us that she is living her early days again and describing people just as she saw them then. The book is unequal ; in the later chapters on convent life and spiritualistic seances there is more than a suspicion of a sceptical humour which belongs rather to the adult than to the child. But the first two chapters at least have the genuine note of simplicity and candour which we look for in childish narrative. Mrs. Soskice, after the death of her father—in or about the year 1890—went to live with her uncle, William Rossetti, who had married the elder daughter of Ford Madox Brown and lived near his father-in-law in a terrace opposite Primrose Hill. William Rossetti was a Civil Servant and, in all externals, a most respectable citizen. But in private he cultivated a taste for anarchy and delighted to entertain red revolutionaries and political refugees from all parts of Europe. In Dante Rossetti's correspondence there are some letters of 1881 in which the poet, himself a very broad-minded man, felt it necessary to warn his sister-in-law that William Rossetti's sonnets in praise of tyrannicide and of the Fenian ill became the " official of a monarchical government." Witham imbued his young children with his doctrines, much to the annoyance of their mother, and Mrs. Soskice was thus introduced at the tender age of eight to the wild absurdities of what we now call Bolshevism. Her cousins, the eldest of whom was barely fifteen, with a lazy page who was the son of the French cook, spent their leisure in writing and printing an anarchist journal called The Torch, which they used to sell in Hyde Park on Sundays. The two younger girls, with the authoress, were entrusted with a mission to reform the police, and they began with a constable on duty at the corner of a neighbouring street. They marched upon him with their • Chapters from Childhood : Reminiscences of an Artist's Grand-daughter. By Juliet B. Soak°. With a Foreword by A. G. Gardiner. London Selwyn and Blount. ilOs. ad. net.]

red banner and their papers, and began to expound the Com- munist doctrine. He was interested in the precocious youngsters and he was tactful :-

" The policeman hitched up his belt with both his thumbs and said, Ali, that's what they call Socialism, that is. What's yours is mine, and what's mine's my own sort o' business, eh ? '

Helen said, What is is everybody's,' very gravely.

That'll want a deal o' putting straight, that will, if ever that conies in,' said the policeman, and he hitched himself up all round again and stamped both his feet, first one and then the other. That'll take a deal o' thinking of.'

Well, but will you think about it ? ' Helen said. Her face looked shining and transparent like the face of the little boy Christ talking to the old Jews in the picture in the Tate Gallery.

Ate, but it wants wiser heads than mine to think about it,' said the policeman. All the thinking I could do wouldn't make it come no clearer. You want a lot of learning to under. stand such things. People says one thing, and people sap another, and from what I can hear they're all a-contradicting of 'emselves and of each other. I don't take much notice of it.'

Will I read the paper ? ' he said, of course I will.' And I gave him one and he took it in his great podgy hand and wrenched himself round and hoisted up his coat tails and rammed it down into his trousers pocket. Then he swung himself straight again, and bobbed up and down and jerked his knees in and out, and stooped again and touched my face with his first finger. It felt just as big and heavy as one of those long, leathery sausages we used to have for supper before the page. boy's mother came.

' I never seen cheeks so red, nor yet eyes so blue,' he said, and what a lot of hair, as soft as silk. I reckon you don't like havin' that brushed out of a °venial' I ' I didn% know what to say. One never does when people make personal remarks.

I got a little lass your size,' he said, with hair that colour, and she makes a rare fuss when her mother puts it into papers of a °venire.' "

Mrs. Soskice often went to see her grandfather in the three

years preceding his death in 1893. He was then painting the Manchester Town Hall fresco of the opening of the Bridgwater Canal, in which the principal figure is a boatman's wife nursing exceedingly well-nourished twins. Mrs. Soskice recalls how she and her cousins accompanied Madox Brown in his search for an infant model, and how they chose the fattest and reddest child at a baby show in Camden Town. She herself had to act as a model, and she was allowed to draw while her grandfather was at work :- " Once a poetess came to be painted by a long, nervous artist who was a pupil of my grandfather's. He wore verybig spectacles because he was short-sighted, and he had a curious squeaky voice. His beard was not like an ordinary beard, but looked like separate tufts of hair pasted on all over his chin and beneath his nose. . . . The poetess (Mathilde Blind) had curly black hair and a hooked nose, and rather a brown face. She put on a black velvet dress to be painted in, and held a big bunch of poppies in her hand. She quarrelled with the artist, and they made a .great noise. She said he made her face look like a piece of gingerbread, and that the poppies were like dabs of scarlet flannel, and he said he had never been spoken to like that in his life before. They talked so loudly, and were so rude to one another, that my grandfather began to climb down from his painting chair to see what it was all about. And just when he had got up to the picture and was going to look at it the artist put his face down on his shoulder and burst into tears. Grandpapa said, Be a man now, H., and control yourself,' and was most kind and patient and tried to make them friends. But the poetess would not be reconciled. She cast a furious look at him and swept out of the room and collided with Aunt Lucy, who was coming up the stairs. Sometimes a crowd of fashionable people came all together to look at the pictures, and then my grandfather changed his coat, and that was called a Private View.' " Her recollections of the servants, too, are amusingly precise. and of course romantic. The Protestant cook and the Roman Catholic housemaid quarrelled so violently about the martyrs of their respective creeds that Madox Brown had to leave his easel and stump downstairs to command that the subject should never again be mentioned in the kitchen. The child's visit to

her grandfather when he was dying is described very naturally.

The authoress was suddenly transferred from the company of anarchists, old and young, to a convent school in London and then to a similar school in Germany. Her account of her experiences abounds in the queer little details that would strike a youthful imagination. Yet the satirical touches seem too subtle for a child of twelve or thirteen. She was no doubt a somewhat exceptional pupil, but her description of the alternate phases of belief and unbelief in her convent life is a little too elaborate and mature. The whimsical account of the seances

to which a morbid young woman took her is cleverly written, especially the oharaoter-sketch of the burglar's mother-in-law, ho wanted to converse with her deceased grandfather and who talked so volubly that she unconsciously gave the medium all the information which he needed to carry out his imposture. Mrs. Soskice has, at any rate, produced an entertaining book.