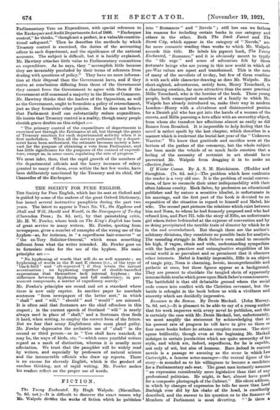 THE SOCIETY FOR PURE ENGLISH.

TIM Society for Pure English, which has its seat at Oxford .and

is guided by some of -the makers of the great Oxford Dictionary, has issued several instructive pamphlets during the past two years. The latest to appear is Tract No. VI., On Hyphens and Shall and ll'ill, Should and Would, in the Newspapers of To-day (Clarendon Press ; 2s. 6d. net), by that ,painstaking critic, Mr. If. W. ,Fowler, whose book on The King's :English has been of great service to many writers. Mr. Fowler, quoting from newspapers, gives a number of examples of -the wrong use of-the hyphen—;as, for instance, in " a superfluous hair-remover " or " the ex-Tory Solicitor-General," which mean something different from what the writer intended. Mr. Fowler goes on to formulate -rules for the use of -the hyphen. His main principles are :- " No hyphening of words that will do as well separate ; no hyphening of words in the B and E classes [i.e., of the type of ' black-bird' and ' oft-repeated '] if they retain the normal accentuation ; no hyphening together of double-barrelled expressions that themselves lack internal hyphens ; the difference between hyphening and full coalescence, in per- manent compounds, a matter of expediency merely."

Mn Fowler's principles are sound and set a standard where there is now only caprice. In another paper he marshals sentences " from newspapers of the better sort," in which " shall " and " will," " should " and " would " are misused. It is often said that Boatsmen are the chief offenders in this respect ; in the current speech of Scotland " will " is nearly

always used in place of "shall," and a.Scotsman thus finds it hard, -when writing, to employ the correct form of the future. But we fear that many Englishmen also must plead guilty.

Mr. .Fowler deprecates the archaistic use of " shall " in the second or third person—as in " You shall have watched, it may be, the ways of birds, etc. "—which some youthful writers

regard as a mark of distinction, whereas it is usually mere affectation. We trust that the pamphlet will be widely read by writers, and especially by professors _of natural science

and the innumerable officials who draw up reporta. There is no excuse for slovenly English, which is the product of careless thinking, not of rapid writing. _Mr. Fowler makes his readers reflect on the proper use of words.