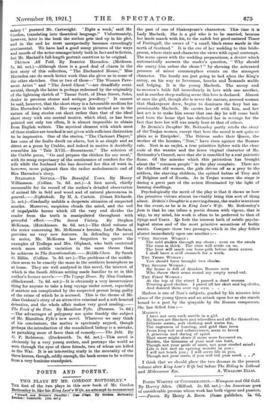 net.)—A first novel, chiefly memorable for its record of the author's detailed observation of animal life in field and- wood and of natural phenomena in generrit—Nightshade. By IL- A. Curtois. (Grant Richards. 7s. net.).—Gradually unfolds a desperate situation of suspected murder. Moreover, suspicion• clouds the- mind, and the veil of impalpable horror which till the very end divides the reader from the truth, is manipulated throughout with powerful ' effect.--The Secret Victory. By Stephen McKenna., (Hutchinson. 8.s. 6d. net.)—The third volume of the series concerning Mr. McKenna's heroine, Lady Barbara, provides no very new features. In defending the novel in series, Mr. McKenna has forgotten to quote the examples of Trollope and Mrs. Oliphant, who both contrived much more subtle variation in the same theme than he achieves in The Sensationalists.—Middle-Class. By Sarah G. Millin. (Collins. 7s. 6d. net.).--The problems of the middle. class seem to be exactly the same in the southern hemisphere as at home. They are well analysed in this novel, the interest of which is the South African setting made familiar to us in this author's former novels.—The Voyage Home. By Alan Graham. (Blackwood. 7s. 6d. net.)—It is obviously a very inconvenient thing for anyone to take a long voyage under arrest, especially if matters are complicated by the suspected person being guilty of the crime of which he is accused. This is the theme of Mr. Alan Graham's story of an attractive criminal and a soft-hearted detective, and the whole affair makes very good reading. The Fruit of the Tree. By Hamilton Fyfe. (Parsons. 7s. 6d.) The advantages of polygamy are quite frankly the subject of Mr. Hamilton Fyfe's new novel. Whatever we may think of his conclusions, the matter is speciously argued, though perhaps the introduction of the scandalized bishop is a mistake, as partaking more of farce than of comedy.—The Debt. By G. P. Robinson. (Duckworth. 7s. 6d. net.)—This novel is obviously by a very young author, and portrays the world as seen through the eyes of three friends, two of whom are killed in the War. It is an interesting study in the mentality of the three heroes, though,.oddly enough, the book seems to be written from a very feminine standpoint.