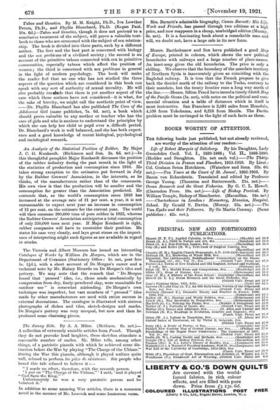 Page 26, 19 November 1921 — they do not provoke loud laughter, these sketches stimulate a
Close

they do not provoke loud laughter, these sketches stimulate a

reasonable number of smiles. Mr. Milne tells, among other things, of a patriotic pianola with which he achieved some dis- tinction before the War by playing " The Charge of the Uhlans." During the War this pianola, although it played waltzes quite well, refused to perform its piece de resistance. Six people who heard this tale refused to believe it :-

" I made an effort, therefore, with the seventh person.

" Cod Save the King." ' • Unfortunately he was a very patnietio person and he believed it."

In addition to some amusing War articles, there is a nonsense novel in the manner of Mr. Leacoek and some humorous verse.