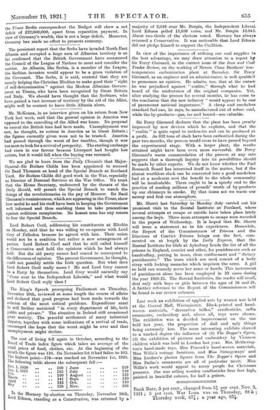 Mr. McKenna, in an interview given on his return from

New York last week, said that the general opinion in America was opposed to the cancelling of the Allied war loans. No proposal to cancel the British loan had been made. Unemployment was not, he thought, so serious in America as in Great Britain ; the figures currently given, were not to be trusted. America had passed 'through the worst of' her troubles, though it was too soon to look for a revival of prosperity. The starling exchange had ',risen in our favour because Liverpool had bought less cotton; but it would fall when• the buying was resumed.