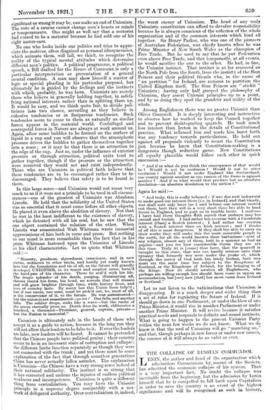 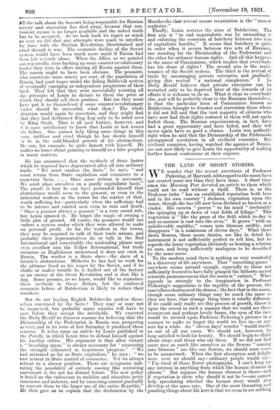 THE COLLAPSE OF RUSSIAN COMMUNISM.

LENIN, the author and head of the organization, which administers Communism by, means of the Soviets, has admitted the economic collapse of his system. That a very important fact. No doubt the collapse was inevitable from the beginning, but the admission by Lenin himself that he is compelled to fall back upon Capitalism in order to save the country is an event of the highest significance and will be recognized as such in history. All the talk about the boycott being responsible for Russian misery and starvation has died away, because that con- venient excuse is no longer available and the naked truth has to be accepted. As we look back we regret as much as ever we did that any attempts were made to interfere by force with the Russian Revolution, bloodstained and cruel though it was. The economic decline of the Soviet system would have been much more rapid if Russia had been left severely alone. When the Allies, as we pointed out repeatedly, were backing up some counter-revolutionary leader they were in effect uniting all Russia against them. The reason ought to have been obvious. The peasants, who constitute some ninety per cent. of the population of Russia, had good hopes under the failing Bolshevik system of eventually emerging as independent proprietors of their land. They felt that they were successfully resisting all the attempts of Lenin to dictate to them the price at which they should sell their produce. But (so they must have put it to themselves) if some counter-revolutionary leader should be successful, what then ? The whole • situation would again be uncertain, and they might find that they had dethroned King Log only to be ruled over by King Stork. That is all past history, however, and it is most satisfactory to know that Lenin at last avows his failure. One cannot help liking some things in this man, ruthless and cruel though he has shown himself to be in the cold-blooded pursuit of his abstractions. fie can, for example, be quite honest with himself. He makes no bones about pointing to himself as a false prophet in many matters.

He has announced that the methods of State barter which he imposed have degenerated after all into ordinary trade. " We must confess the facts," he says, " and must return from State capitalism and commerce to a monetary basis. . . . Once more retreat is necessary. We must place ourselves on a purely capitalistic basis." The puzzle is how he can have persuaded himself that abstractions would seem to the peasant, - or even to the industrial workers in the towns for the matter of that, worth suffering for—particularly when the sufferings had to be intense and carried men even to ruin and death. " Once a peasant always a peasant " is a very sound rule, but Lenin ignored it. He forgot the magic of owning a little plot of ground. Of course, the peasants would not endure a system under which they were allowed to make no personal profit. As for the workers in the towns, they may be required to talk of their trade unions, and probably their representatives do so talk in the Red International and conceivably the misleading phrase may even overflow into the Yellow International, but trade unionism as Englishmen understand it does not exist in Russia. The worker is a State slave—the slave of a fanatic's abstractions. Hitherto he has had to work for the pittance fixed as his wages by the Soviet, and if he shirks or makes trouble he is hauled out of the factory as an enemy of the Great Revolution and is shot like a dog. Some persons, as we know, would like to reproduce these methods in Great Britain, but the confessed economic failure of Bolshevism is likely to reduce their numbers.

But do our leading English Bolsheviks profess them- selves convinced by the facts ? They may or may not be impressed, but probably many months will have to pass before they accept the inevitable. We expected the Daily Herald to discover reasons for believing that the Dictatorship of the Proletariat in Russia was prospering RS ever, and in its issue of last Saturday it produced those reasons. It relies upon an article by Lenin published in the Pravda, in which Lenin tries to defend himself against his Jacobin critics. His argument is that after victory a " breathing spaco " is always necessary. for " recovering the strength exhausted in impetuous progress." " We had retreated as far as State capitalism," he says ; " we now retreat to State control of commerce. Yet we always retreat to a chosen position. There are symptoms indi- cating the possibility of entirely ceasing this retreating i movement in the not far distant future. The new policy is based on the endeavour to stabilize and stimulate petty commerce and industry, and by exercising control gradually to convert them to the larger use of the entire Republic." He then goes on to explain that the declaration by the Mensheviks that retreat means recantation is the "merest sophistry." Finally, Lenin restates the aims of Bolshevism. The first aim is " to end imperialistic war by unmasking it and enforcing the cessation of butchery between two sets of capitalistic bandits." It seems that butchery is quite in order when it occurs between two sets of Russians, one standing for the Dictatorship of the Proletariat and the other for ordinary human rights. And all this happens in the name of Communism, which implies that everybody has his share of rights ! The second aim is the main- tenance of the Soviet system. The third is the revival of trade by encouraging private enterprise and gradually giving this revival " a national complexion." L ho Daily Herald believes that private enterprise can be restarted only to be deprived later of the rewards of its efforts it is welcome to do so. What is clear to everybody else, and will be perfectly clear to the Russians themselves, is that the particular form of Communism known as Bolshevism brought to disaster and starvation those whom it did not kill and that the vast majority of citizens who have now had their rights restored to them will not again forfeit them. The Russian experimenters, in fact, have had a great opportunity and have failed, and they will never again have so good a chance. Lenin was perfectly right when he said that the Dictatorship of the Proletariat presupposed revolution in all civilized countries. But civilized countries, having watched the agonies of Russia, are not now likely to give Lenin the opportunity of making further honest confessions at their expense.