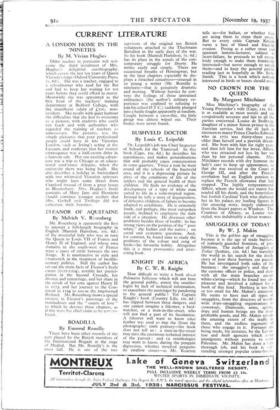 There have been other records of the part played by the British members of the International Brigade at the siege of Madrid. But Mr. l.omilly's is the most full. He is one of the two survivors of the original ten British volunteers attached to the Thaelmann Battalion in the early days of the war. So his book (Hamish Hamilton, 7s. 6d.) has its place in the annals of the con- temporary struggle for liberty. He writes easily and simply. There are occasional breaths of Hemingway, but in the later chapters especially he dis- plays a detached casualness—unusual in so young a writer (Mr. Romilly is nineteen)—that is genuinely dramatic and moving. Without heroics he con- veys the feelings of those untrained enthusiasts (the author's military ex- perience was confined to refusing to join his school O.T.C.) suddenly plunged into a battle fought apparently at random. Caught between a cross-fire, the little group was almost wiped out. Their bodies were never found.