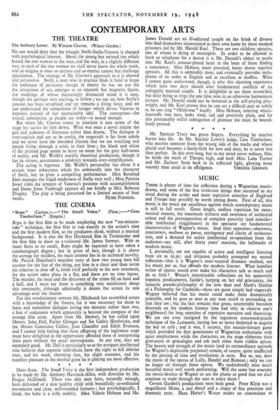 Rope is the first film to be made employing the new "ten-minute- take " technique, the first film to run exactly to the action's time and the first modern film, so the producers think, without a musical background. It is also the first Hitchcock film in Technicolor and the first film to show us a coloured Mr. James Stewart. With so many firsts to its credit, Rope might be expected to have taken a cinematograph degree ; but in point of fact, though it is above the average for thrillers, the main interest lies in its technical novelty. Mr. Patrick Hamilton's macabre story of how two young men kill another for the fun of the thing, put him in a chest and then invite his relatives to dine off it, lends itself perfectly to the new treatment, for the action takes place in a flat, and there are no time lapses. The murder, the meal and the discovery of the crime fill an hour and a half, and I must say there is something very satisfactory about this continuity, although admittedly it denies the screen its sole advantage over the theatre.

For this revolutionary venture Mr. Hitchcock has assembled actors with a knowledge of the theatre, for it was necessary for them to learn and remember dialogue lasting ten minutes rather than two, a feat of endurance which apparently is beyond the compass of the average film actor. Apart from Mr. Stewart, he has called upon Messrs. John Dail, Farley Granger and Sir Cedric Hardwicke, and the Misses Constance Collier, Joan Chandler and Edith Evanson, and I cannot help feeling that these offspring of the legitimate stage must have delighted in the opportunity afforded them of interpreting their parts without the usual interruptions. At any rate, they are extremely good. Mr. Dall is particularly so as the arrogant intellectual who believes that superior individuals have the right to kill inferior ones, and his weak, charming face, his slight stammer, and his manifest pleasure in the morbid game he is playing are most effective. * * * *

More firsts. The Small Voice is the first independent production to be made by Mr. Anthony Havelock-Allen, with direction by Mr. Fergus McDonell. These two able men have, naturally enough, been delivered of a nice healthy child with beautifully co-ordinated movements and clear, well-rounded features ; but psychologically, I think, the babe is a trifle wobbly. Miss Valerie Hobson and Mr.

James Donald are an ill-adjusted couple on the brink of divorce who find themselves incarcerated in their own home by three escaped prisoners led by Mr. Harold Keel. There are two children upstairs, one of whom is dying of meningitis. In order to be allowed to fetch or telephone for a doctor it is Mr. Donald's object to probe into Mr. Keel's armour-plated heart in the hope of there finding a conscience. Miss Hobson, more practical, knots sheets together upstairs. All this is admirably done, and eventually provides melo- drama of an order as English and as excellent as muffins. What I cannot quite understand, though, is why this alarming experience which lasts two days should alter fundamental conflicts of an unhappily married couple. It is delightful to see them reconciled, but their being so rings the one false note in an otherwise harmonious picture. Mr. Donald could not be bettered as the self-pitying play- wright, and Mr. Keel proves that he can act a difficult part as subtly as he can sing " Oklahoma " loudly. Miss Hobson, entering whole- heartedly into hers, looks tired, sad and positively plain, and for this presumably wilful subjugation of glamour she must be bound- lessly praised. * * * Mr. Spencer Tracy has green fingers. Everything he touches bursts into life. As Mr. Sinclair Lewis's judge, Cass Timberlane, who marries someone from the wrong side of the tracks and whose placid soul becomes a battle-field for love and duty, he is never less than perfect. In this over-long, but to my mind never tedious, film, he holds the torch of Thespis high, and both Miss Lana Turner and Mr. Zachary Scott bask in its reflected light, glowing more