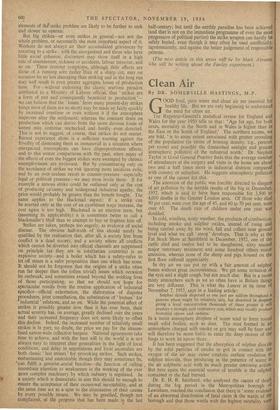 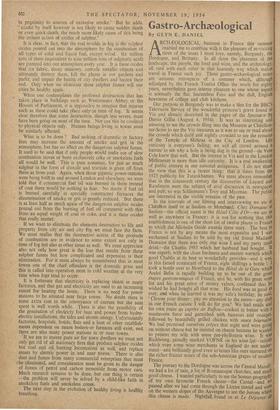 GOOD food, pure water 6n1 clean' air are essential for healthy life. But we are only beginning to understand the need for clean air. • The Registrar-General's statistical review for England and Wales for the year 1950 tells us that: ' Age for age, for both sexes, mortality in the North and in Wales is higher than in the East or the South of England.' The northern excess, we are told, ' is to some extent associated with greater crowding of the population (in terms of housing density, e.g., persons per room) and possibly the diminished sunlight and greater atmospheric pollution of the industrial north.' Dr. Stephen Taylor in Good General Practice finds that the average number of attendances at the surgery and visits in the home are about two and a. half times more in industrial districts compared with country or suburban. He suggests atmospheric pollution as one of the causes for this.

The attention of the public was forcibly directed to dangers of air pollution by the terrible results of the fog in December, 1952, which is said to have been responsible for 3,500 to 4,000 deaths in the Greater London area. Of those who died 90 per cent. were over the age of 45, and 60 to 70 per cent. were over 65. The death rate of children under one year was doubled: In cold, windless, misty weather, the products of combustion, including smoke and sulphur oxides, instead or rising and being carried away by the wind, fall and collect near ground level and what we call ' smog' develops. That is why at the Fat Stock Show at Smithfield in December, 1952, one of the cattle died and twelve had to be slaughtered, sixty needed major veterinary treatment and some hundred others minor attention, whereas none of the sheep and pigs housed on the

In dry air we can put up with a fair amount of sulphur fumes without great inconvenience. We get some irritation of the eyes, and a slight cough, but not much else. But in a moist misty atmosphere such as we so often have in Britain things are very different. This is what the Lancet in its issue of November 7, 1953, says in a leading article:

Sulphur dioxide dispersed as one part per million throughout e gaseous phase might be relatively safe, but dissolved in droplets giving a local concentration thousands of times greater it will produce a strongly acid respiratory rain, which may readily produce bronchial spasm and oedema.

In a moist atmosphere droplets of water tend to form round small solid bodies, such as dust. The mist forte ed in an atmosphere charged with smoke or grit may well be finer and will .therefore be more liable to enter the deep recesss of the lungs to work its havoc there. in proximity to sources of excessive smoke.' But he adds, smoke by itself however is not likely to cause sudden death or even quick Ideath, the much more likely cause of this being the irritant action of oxides of sulphur' It is clear, in fact, that the real trouble in fog is the sulphur oxides poured out into the atmosphere by the combustion of all types of solid and liquid fuel, except wood. Six million tons of them (equivalent to nine million tons of sulphuric acid) are pumped into our atmosphere ,every year. It is these oxides that rot fabric, decay masonry, corrode metallic objects and ultimately destroy them, kill the plants in our gardens and parks, and impair the health of city dwellers and hasten their end. Only when we eliminate these sulphur fumes will our cities be healthy again. k When one contemplates the profound destruction that has taken , place in buildings such as Westminster Abbey or the Houses of Parliament, it is impossib'e to imagine that injuries such as these could take place only in time of fog. It seems clear therefore that some destruction, though less severe, must have been going on most of the time. Nor can this be confined to physical objects only. Human beings living in towns must be similarly affected.

What is to be done ? Bad stoking of domestic or factory fires may increase the amount of smoke and grit in the atmosphere, but has no effect on the dangerous sulphur fumes. It used to be said that if only people would make use of slow combustion stoves or burn exclusively coke or smokeless fuels all would be well. This is pure nonsense, for just as much sulphur in the form of dioxide and trioxide is given off from these as from coal. Again, when those gigantic power-stations were being built in and around London and elsewhere, we were told that if commercial fuel 'oil was burned in them instead of coal there would be nothing to fear. No doubt if fuel oil is burned carefully in specially constructed furnaces the dissemination of smoke or grit is greatly reduced. But there is at least half as much again of the dangerous sulphur oxides poured out from the burning of fuel oil compared with that ftom an equal weight of coal or coke, and it is these oxides that really matter.

If we want to eliminate the elements destructive to life and property from city air and city fog we must face the facts. We must realise that the destructive action of the products of combustion are in evidence to some extent not only in time of fog but also at other times as well. We must appreciate also not only how great is the loss that results from these sulphur fumes but how complicated and expensive is their elimination. For it must always be remembered that in most towns one of the chief offenders is the domestic grate and this is called into operation most in cold weather at the very time when fogs tend to occur.

It is fortunate that electricity is replacing steam in many factories, and that gas and electricity are used to an increasing extent for heating the home. There is no need for power stations to be situated near large towns. No doubt there is some extra cost in the conveyance of current but the sum spent is well worth while. There is also the possibility of the generation of electricty for heat and power from hydro- electric installations, the tides and atomic energy. Unfortunately factories, hospitals, hotels, flats and a host of other establish- ments dependent on steam boilers-or furnaces still exist, and there are also many power stations in or near towns.

If we are to ensure pure air for town dwellers we must not only get rid of all stationary fires that produce sulphur oxides but coal and oil burning locomotives as well, and replace