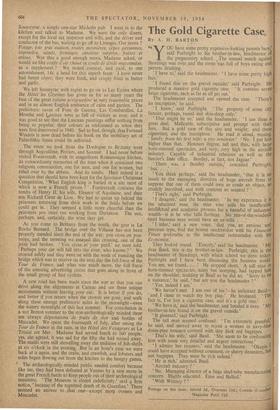 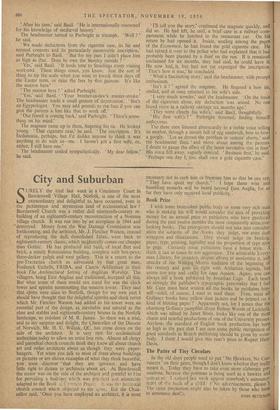 OU have some pretty expensive-looking parents here, said Purbright to his brother-in-law, headmaster of the preparatory school. The annual match against Steadings was over and the room was full of boys eating and parents drinking. I have to,' said the headmaster. ' I have some pretty high fees.'

I found this on the gravel outside,' said Purbright. Ne produced a massive gold cigarette case. It contains seven beige cigarettes, each as fat as all get out.' The headmaster accepted and opened the case. There's an inscription,' he said. I know,' said Purbright. The property of some city fancier, perhaps, tweed suit skin-deep only.'

That might be so,' said the headmaster. I use them a great deal. Malleable, subscriptive and prompt with their fees. But a gold case of this size and weight; and these cigarettes; and the inscription.' He read it aloud, musing. ' Sandy, from his first ►wife; a tiny reminder.' No. I put hint higher than that. Honours degree, tall and thin, with large horn-rimmed spectacles, and very, very high in the aircraft industry. Capable of industrial relations as well as the fancier's little office. Bentley, in fact, not Jaguar.' There was a Bentley outside.' conceded Purbright, but. . .

You think perhaps,' said the headmaster, that it is an insult to the managing directors of huge aircraft firms to suppose that one of them could own so crude an object, so crudely inscribed, and with contents so scented ? '

That's right,' said Purbright. I disagree,' said the headmaster. In my experience it is the educated man, the man who sells his insufferable intellectual and academic prowess for a basinful of industrial wealth—it is he who falls furthest. No run-of-the-windmill Aired business man would have an ex-wife. . . " I infer,' said a new voice, that you, an envious and precious type, find the honest stockbroker with his Financial Times preferable to the intellectual industrialist with his Economist.'

They looked round. Exactly,' said the headmaster. MY dear Basil, this is my brother-in-law. Purbright, this is the headmaster of Steadings. with which school we drew todaY, Purbright and I have been discussing the business world. You see, we found. . . .' He stopped short. A tall man in horn-rimmed spectacles, natty but stooping, had tapped biro on the shoulder, nodding at Basil as he did so. Sorry to 110 a nuisance?, he said, but are you the headmaster ? '

' We haven't met. I am one of his '—he indicated Basil-- and I came to watch my boy play.' He hesitated. The fact is, I've lost a cigarette case, and it's a gold one.' We have it,' said the headmaster, and handed it over. ' MY brother-in-law found it on the gravel outside.' It gleamed,' said Purbright. The tall man seemed confused. ' I'm extremely grateful' he said, and moved away to rejoin a woman in navy-blue drain-pipe trousers covered with tiny dark red bagpipes. That's his wife,' said Basil. ' She seem to be confronting him with some very detailed and urgent instructions.' I admire her trousers,' said the headmaster. 'Okapis I could have accepted without comment, or sherry decanters, bat not bagpipes. They must be rich indeed.'

He is rich,' admitted Basil.

Aircraft industry.? ' ' No. Managing director of a huge steel-tube manufacturing concern. Highly educated. Eton and Balliol.' With Wimsey ? ' After his time,' said Basil. ` He is internationally renowned for his knowledge of mediicval history.'

The headmaster turned to Purbright in triumph. Well ? ' he said.

We made deductions from the cigarette case, its fat and scented contents and its particularly memorable inscription,' said Purbright to Basil. But for my part I didn't place him as high as that. Does he own the Bentley outside ? '

Yes,' said Basil. ' It lends tone to Steadings every visiting week-end. These things count, you know. Just the sort of thing to tip the scale when you want to knock three days off the Easter term, or raise the fees by .five guineas. It's like the matron here.'

Yes,' said Basil. . Your brother-in-law's master-stroke.' The headmaster made a small gesture of deprecation. ' She's an Egyptologist. You may add pounds to the fees if you can give the parents a line like that to work off.'

Our friend is coming back,' said Purbright. There's some- thing on his mind.'

The headmaster smiled sympathetically. My dear fellow,' he said. ` I'll tell you the story,' continued the magnate quickly, and did so. He had left, he said, a brief case in a railway com- partment while he lunched in the restaurant car. On his return he had opened it. Inside, nestling among the pages of the Economist, he had found the gold cigarette case. He had turned it over to the police who had explained that it had probably been planted by a thief on the run: If it remained unclaimed for six months, they had said, he could have it. He now had, it, but had not yet expunged the inscription. That's how it was,' he concluded.

What a fascinating story,' said the headmaster, with prompt enthusiasm. • Isn't it ? ' agreed the magnate. He fingered a bow tie, smiled, and at once returned to his wife's side.

I very Much wonder,' said the headmaster. On the basis of the cigarettes alone, my deduction 'was sound. No one found then, in a railway carriage six months ago.'

They were clearly his wife's,' said Basil, thoughtfully. His first wife's ? ' Purbright frowned; finding himself ambi:Ktous. The three men listened abstractedly to a treble voice telling its mother, through a mouth full of egg sandwich, how to howl a googly. ' Let us drown the problem in visitors' sherry,' said the headmaster then, and move about among the parents. I desire to gauge the effect of the latest inevitable rise in fees.

His voice fell away, vaguely ironical. Business first,' he said. ' Perhaps one day I, too, shall own a gold cigarette case.'