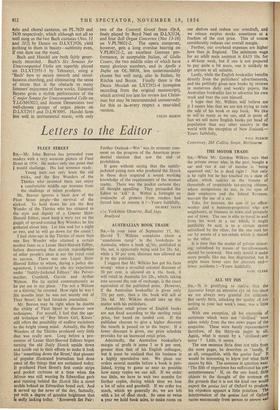 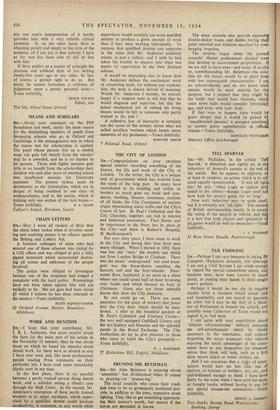 SIR,—It is gratifying to realise that the Spectator keeps an attentive eye on Isis since we are always very grateful for criticism. Eut surely Strix, attacking the quality of Isis writing in your last week's issue, was a little unfair.

With one exception, all his example's of sentences which were not ' civilised ' were taken solely from the two news pages of the magazine. These were barely representative therefore, of the thirty-six pages in all. Again, what is meant by a ' civilised sen- tence' / Little, it seems.

The one sentence Strix does not take from the news pages, he describes as barely, if at all, compatible, with the genius lock' It would be interesting to know just what Stri% means by this. The sentence in question was! ' The filth of experience has suffocated his pre' sumptuousness' If, on the one hand, SUN objects to the thought of the sentence en the grounds that it is not the kind one would expect the genius loci of Oxford to produce, his objeotion appears a little pointless. The interpretation of the genius loci of Oxford varies enormously from person to person and

any one man's interpretation of it hardly provides him with a very reliable critical yardstick. If, on the other hand, Strix is objecting purely and simply to the style of the sentence, all I can say is that nobody I have so far met has been able to fall in line with him.

If Strix prefers as a matter of principle the precious and artificial style of Isis writing twenty-five years ago to any other, he has, of course, a perfect right to do so. But surely he cannot formulate a crit6rion of judgement upon a purely personal taste.— Yours faithfully,