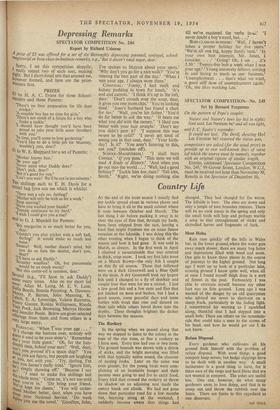 In the spring when we passed along that way we stopped to listen to the colony in the tops of the elm trees, as fine a rookery as 1 have seen. Every tree had one or two nests. The ground beneath was strewn with a debris of sticks, and the bright morning was filled with that typically native sound, the clamour of nesting rooks. Later on the noise was even greater, for the young birds were com- plaining of an insatiable hunger and their parents were going to and fro to carry food. Every bird that crossed the rookery or threw its shadow on an adjoining nest made the outcry break out afresh. We had not gone down that particular road for a few months but, hurrying along at the weekend, I suddenly became aware that things had changed. They had changed for the worse. The hillside is bare. The elms are down and only a jungle of torn branches remains. There will be no rook music in the spring and only the small birds will 'hop and perhaps warble a song in that entanglement of sticks and shrivelled leaves and fragments of bark.