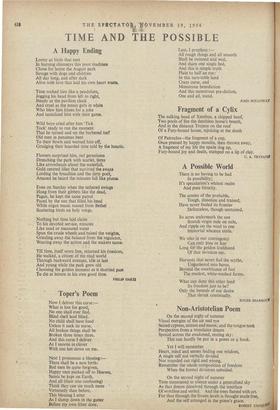 TIME AND THE POSSIBLE

Loony as birds that nest In burning chimneys this poor madman Chose for home the August park Savage with dogs and children All day long, and after dark Alive with love that laid his own heart waste, Time rocked him like a pendulum, Jogging his head from left to right, Steady as the pavilion clock And cruel as the tennis girls in white Who blew him kisses for a joke And tantalized him with their game.

Wild boys cried after him 'Tick Tock' ready to run the moment That he turned and on the barbered turf Old men in panamas bent To their bowls and warned him off, Grudging their hoarded time told by the lunatic.

Flowers surprised him, red geraniums Drenching the park with scarlet, ferns Like arrowheads about the waterfall, Gold centred lilies that survived the swans Lording the breadline and the dirty pool, Amazed he heard the minutes fall like plums.

Even on Sunday when the tethered swings Hung from their gibbets like the dead, Pagan, he kept the same patrol Paced by the sun that filled his head While organ music roared from Bethel , Scattering birds on holy wings.

Nothing but time laid claim To his devoted service, minutes Like sand or measured water Spun the crude wheels and raised the weights, Grinding away the balance from the regulator, Wearing away the action and the makers name Till time, itself worn free, returned his freedom; He walked, a citizen of the mad world Through backward avenues, idle at last And young while the park grew old Choosing the golden moment as it shuttled past To die at leisure in his own good time.