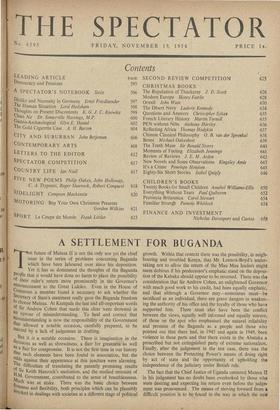 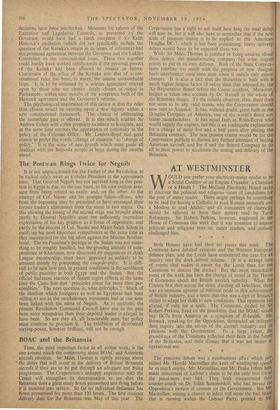 A SETTLEMENT FOR BUGANDA

THE future of Mutesa IT is not the only nor yet the chief issue in the series of problems concerning Buganda • which have been laboured over since his deposition. Yet it has so dominated the thoughts of the Baganda Peorile that it would have done no harm to place the possibility of their ruler's return more prominently in the Governor's announcement to the Great Lukiko. Even in the House of Commons a member found it necessary to ask whether the Secretary of State's statement really gave the Baganda freedom to choose'Mutesa. At Kampala the last and all-important words of Sir Andrew Cohen that made this clear Were drowned in an uproar of misunderstanding. To heal and correct that Misunderstanding is now the responsibility of the Government that allowed a notable occasion, carefully prepared, to be Marred by a lack of judgement in drafting.

, But it is a notable occasion. There is imagination in the decisions as well as shrewdness, a flair for greatness as well as a flair for compromise. It is not the first time in our history that such elements have been found in association, but the odds against their appearance at this juncture were alarming. The difficulties of translating the patently promising results of Sir Keith Hancock's mediation, and the studied restraint of „,..M. Government, contributed to the sense of breathlessness. Much was at stake. There was the basic choice between "Jinness and flexibility, both principles which can be plausibly Invoked in dealings with societies at a different stage of political growth. Within that context there was the possibility, in neigh- bouring and troubled Kenya, that Mr. Lennox-Boyd's under- taking not to allow the return of the Mau Mau leaders might seem dubious if his predecessor's emphatic stand on the deposi- tion of the Kabaka should appear to be reversed. There was the consideration that Sir Andrew Cohen, an enlightened Governor with much good work to his credit, had been equally emphatic, and that although a Governor may—sometimes must—be sacrificed as an individual, there are grave dangers in weaken- ing the authority of his office and the loyalty of those who have supported him. There must also have been the conflict between the views, equally well informed and equally sincere, of those on the spot who emphasised the natural reliability and promise of the Baganda as a people and those who pointed out that there had, in 1945 and again in 1949, .been violence in these parts and that there exists in the Abataka a proscribed but not extinguished party of extreme nationalism. Finally, after the judgement in the test case, there was the choice between the Protecting Power's means of doing right by act of state and the opportunity of upholding the independence of the judiciary under British rule.

The fact that the Chief Justice of Uganda censured Mutesa II in his judgement has no doubt been overlooked by those who were desiring and expecting his return even before the judge- ment was pronounced. The means of moving forward from a difficult position is to be found in the way in which the new decisions have been interlocked. Measures for reform of the Executive and Legislative Councils, as presented by the Governor, would have had a bleak reception if S:r Keith Hancock's mediation (which did not specifically include the question of the Kabaka's return in its terms of reference) had not produced agreement between the Governor and the Lukiko Committee on the constitutional issue. These two together could hardly have worked satisfactorily if the personal powers of the Kabaka had been allowed to remain as before. Conversion of the office of the Kabaka into that of a con- stitutional ruler has been, to many; the almost unbreathable hope. It is to be obtained by a solemn agreement entered upon by those who are chosen --freely chosen as stated in Parliament—within nine months of the acceptance both of the Hancock agreement and the Governor's reforms.

The psychological importance of this device is that the ruler thus chosen would be entering upon a new dignity within a new constitutional framework, The chance of obliterating the immediate past is offered. It is this which enables Sir Andrew Cohen with entire propriety to return to Kampala, and at the same time restores the appearance of continuity in the policy of the Colonial Office. Mr. Lennox-Boyd had good reason to prefer the words ' change of situation ' to ' change of policy.' It is the sense of new growth which must guide all dealings with the Baganda people at large during the months ahead.