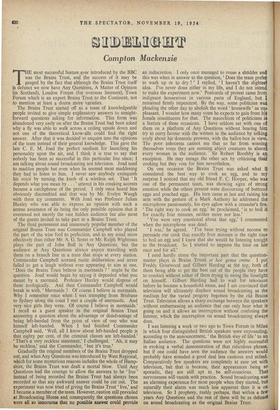 THE most successful feature ever introduced by the BBC was the Brains Trust, and the success of it may be gauged by the fact that although the Brains Trust itself is defunct we now have Any Questions, A Matter of Opinion (in Scotland), London Forum (for overseas listeners), Town Forum which is an export Brains Trust to the Continent, not to mention at least a dozen more varieties.

The Brains Trust started off as a team of knowledgeable people invited to give simple explanatory answers to straight- forward questions asking for information. This form was abandoned very early on after the Brains Trust had been asked why a fly was able to walk across a ceiling upside down and not one of the theoretical know-alls could find the right answer. After that it was decided to enquire into the opinions of the team instead of their general knowledge. This gave the late C. E. M. Joad the perfect medium for launching his personality upon the air, and I think it is true to say that nobody has been so successful in this particular line since; I am talking about sound broadcasting not television. Joad used to madden people but even when he seemed most maddening they had to listen to him. I never saw anybody extinguish his voice by turning the knob of a wireless set. That ' It depends what you mean by ... ' uttered in his creaking accents became a catchphrase of the period. I only once heard him obviously discomfited and that was by Mr. Evelyn Waugh with three icy comments. With Joad was Professor Julian Huxley who was able to express an opinion with such a serene assurance of its being the only possible opinion that it overawed not merely the vast hidden audience but also most of the guests invited to take part in a Brains Trust.

The third permanent and immensely popular member of the original Brains Trust was Commander Campbell who played the part of the wise fool to perfection, and to my mind more effectively than either Mr. A. G. Street or Mr. Ralph Wightman plays the part of John Bull in Any Questions, but the audience at Any Questions always enjoys travelling with them on a branch line in a train that stops at every station. Commander Campbell scorned rustic deliberation and never failed to get a laugh without ever appearing to aim at one. ' Does the Brains Trust believe in mermaids ? ' might be the question. Joad would begin by saying it depended what you meant by a mermaid. Professor Huxley would dispose of them zoologically. And then Commander Campbell would break in with, ' Mermaids ? Of course I believe in mermaids. Why I remember once when I was tramping from Brisbane to Sydney along the coast I met a couple of mermaids. And very, nice girls they were. Of course I believe in mermaids.' I recall as a guest speaker in the original Brains Trust answering a question about the advantage or disadvantage of being left-handed from the point of view of one who was himself left-handed. When I had finished Commander Campbell said, ' Well, all I know about left-handed people is that eighty per cent. of the criminal classes are left-handed.' ' That's a very reckless statement,' I- challenged. ' Ali. it may be reckless,' said the Commander, ' but it's true.'

Gradually the original members of the Brains Trust dropped out, and when Any Questions was introduced by West Regional, which for some mysterious reasons includes the whole of Hamp- shire, the Brains Trust was dealt a mortal blow. Until Any Questions- had the courage to allow the answers to be ' live ' instead of being recorded the Brains Trust had always been recorded so that any awkward answer could be cut out. The experiment was now tried of giving the Brains Trust ' live,' and I became a member of the team. However, caution still prevailed at Broadcasting House and consequently the questions chosen were all so innocuous that no possible answer could provide an indiscretion. I only once managed to rouse a shudder and this was when in answer to the question, Does the team prefer to wash up or to dry ? ' I replied, I haven't the slightest idea. I've never done either in my life, and I do not intend to make the experiment now.' Postcards of protest came front' indignant housewives in various parts of England, but I remained firmly impenitent. By the way, some politician war pleading the other day to abolish the word housewife' as un* pleasant. I wonder how many votes he expects to gain from hi, female constituents for that. The masochism of politicians is a feature of these occasions. I have seldom sat with one of them on a platform of Any Questions without hearing hitt), try to curry favour with the women in the audience by talking coyly about his domestic prowess, with the ballot-box in view, The poor innocents cannot see that ,so far from winning themselves votes they are seeming abject creatures to almost every woman in the audience. Sir Robert Boothby is 114 exception. He may enrage the other sex by criticising their cooking but they vote for him nevertheless.

On one occasion the Brains Trust was asked what it considered the best way to cook an egg, and to my surprise I noticed that my old friend F. C. Hooper, who was one of the permanent team, was showing signs of strong emotion while the others present were discoursing of buttered eggs and poached eggs. His turn came at last and raising his arm with the gesture of a Mark Anthony he addressed the microphone passionately, his eyes aglow with a crusader's fire, The right way to cook an egg,' he proclaimed, is to boil it for exactly four minutes, neither more nor less.' ' You were very emotional about that egg,' I commented when the microphone was dead. I was,' he agreed. I've been trying without success to persuade our cook that exactly four minutes is the right time to boil an egg and I knew that she would be listening tonight to the broadcast. So I wanted to impress the time on her once and for all.'

I need hardly stress the important part that the question- master plays in Brains Trusts et hoc genus omne. I put Freddy Grisewood and Gilbert Harding at the top, both of them being able to get the best out of the people they have to conduct without either of them trying to swing the limelight on himself. Gilbert Harding had to wait for television before he became a, household, name, and I am convinced that television will ultimately displace sound broadcasting as the medium for the varied progeny begotten by the old Brains Trust. Television allows a sharp exchange between the speakers without embarrassing an audience that can only hear what is going on and it allows an interruption without confusing the listener, which the interruption on sound broadcasting always does.

I was listening a week or two ago to Town Forum in Milan in which four distinguished British speakers were expounding, according to the announcement, the British say of life ' to an Italian audience. The questions were not highly successful in evoking a verbal demonstration of that ridiculous phrase, but if one could have seen the audience the answers would probably have sounded a• good deal less cautious and stilted. Comparatively few speakers are completely at ease yet with television, but that is because, their appearances being so sporadic, they are still apt to be self-conscious. That nervousness will vanish with practice. Sound broadcasting was an alarming experience for most people when they started, but naturally their alarm was much less apparent than it is on television. So I prophesy, rashly perhaps, that within a rev/ years Any Questions and the rest of them will be as defunct on sound broadcasting as the original Brains Trust.