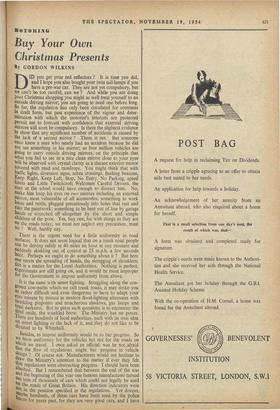 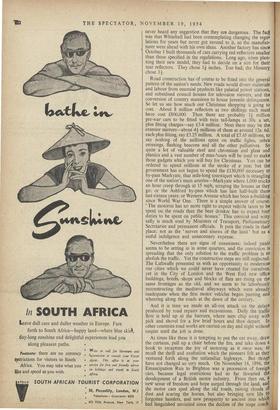 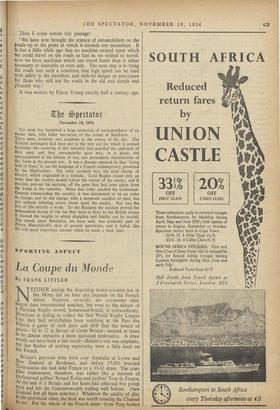 Buy Your Own Christmas Presents

BY GORDON WILKINS DID you get your red reflectors ? It is time you did. and I hope you also bought your twin tail-lamps if you have a pre-war car. They are not yet compulsory, but we can't be too careful, can we ? And while you are doing Your Christmas shopping you might as well treat yourself to an outside driving mirror; you are going to need one before long. So far, the regulation has only been circulated for comment In draft form, but past experience of the vigour and deter- mination with which the motorist's interests are protected Permit me 0 forecast with confidence that external driving Mirrors will soon be compulsory. Is there the slightest evidence to show that any significant number of accidents is caused by the lack of a second mirror ? There is not. But someone once knew a man who nearly had an accident because he did not see something in his mirror; so four million vehicles are going to carry outside driving mirrors, on the principle that what you fail to see in a nice clean mirror close to your eyes Will be observed with crystal clarity in a distant exterior mirror covered with mud and raindrops. You might think that with traffic lights, diversion signs, zebra crossings, flashing beacons, keep Right, Keep Left, Stop, No Entry, No Parking, speed limits and Little Twitchcroft Welcomes Careful Drivers, the man at the wheel would have enough to distract him. No; make him keep his eyes on two mirrors including an external Mirror, most vulnerable of all accessories; something to work loose and rattle, plugged precariously into holes that rust and ruin the paintwork; something to be bent out of line by garage bands or wrenched off altogether by the short and simple Children of the poor. Yes, buy one, for with things as they are On the roads today, we must not neglect any precaution, must We ? Well, hardly any.

There is the urgent need for a little uniformity in road surfaces. It does not seem logical that on a trunk road people con be driving safely at 40 miles an hour at one moment and Suddenly skidding out of control at 25 m.p.h. a few seconds later. Perhaps we ought to do something about it ? But here one meets the spreading of hands, the shrugging of shoulders; this is a matter for the Local Authorities. Nothing is perfect; cxPeriments are still going on, and it would be most improper for the Government to impose uniformity from above.

It is the same with street lighting. Struggling along the con- tested cow-paths which. we call trunk roads, it may strike you as rather difficult and even dangerous to have to adapt your CYes minute by minute as modern flood-lighting alternates with !winkling pinpoints and treacherous shadows, gas lamps and total darkness. But to press such questions is to encounter the ,,red smile, the wrinkled brow. The Ministry has no power. • &here are hundreds of local authorities, each with its own idea on street lighting or the lack of it, and they do not like to be dictated to by Whitehall.

Besides, to impose uniformity would be to bar progress. So We have uniformity for the vehicles but not for the roads on which we travel. 1 once asked an official, was he not,afraid that the flow of regulations might bar progress in vehicle design ? Of course not. Manufacturers would not hesitate to draw the Ministry's attention to the matter if ever they felt that regulations were obstructing progress. I should have been abashed. But I remembered that between the end of the war and the beginning of this year one famous manufacturer turned out tens of thousands of cars which could not legally be used oil the roads of Great Britain. His direction, indicators were a°t in the position specified in the regulations. Yet dozens, raYbe hundreds, of these cars have been used by the police °tees for years past, for they are very good cars, and I have never heard any suggestion that they are dangerous. The faO was that Whitehall had been contemplating changing the rep+ lations for years but never got around to it, so the manufae turer went ahead with his own ideas. Another factory has since October 1 built thousands of cars carrying red reflectors smile] than those specified in the regulations. Long ago, when plan ning their new model, they had to decide on a size for theii rear reflectors. They chose 11 inches. Too bad; the Ministr] chose 1.

Road construction has of course to be fitted into the general pattern of the nation's needs. New roads would divert materials and labour from essential prpducts like palatial power stations, and subsidised council houses for television viewers, and the conversion of country mansions to house juvenile delinquents. So let us see how much our Christmas shopping is going to cost. About 8 million reflectors at two shillings each must have cost £800,000. Then there are probably 1/ million pre-war cars to be fitted with twin tail-lamps at. 30s. a 'set, plus fitting charges—say £3.4 million. Next there may be the exterior mirrors—about 4-1 millions of them at around 12s. 6d. each plus fitting, say £3.25 million. A total of £7.45 millions, to say nothing of the millions spent on traffic lights, zebra crossings, flashing beacons and all the other palliatives. So quite a lot of valuable steel and chromium and glass and plastics and a vast number of man-hours will be used to make those gadgets which you will buy for Christmas. You can be ordered to spend millions at the stroke of a' pen; but the government has not begun to spend the £130,000 necessary to by-pass Markyate, that mile-long tourniquet which is strangling one of the nation's main arteries—Markyate where 1,000 trucks an hour creep through at 15 mph, scraping the houses as they go; or the Ashford by-pass which has lain half-built these last sixteen years; or Western Avenue which has been a-building since World War One. There is a simple answer of course • ' The motorist has no more right to expect vehicle taxes to be spent on the roads than the beer drinker has to expect beet duties to be spent on public houses.' This comical and witty sally is much used by Ministers of Transport, Parliamentary Secretaries and permanent officials. It puts the roads in their place; not as the `nerves and sinews of the land' but as sinful indulgence and unnecessary expense.

Nevertheless there are signs of uneasiness; indeed panto seems to be setting in in some quarters, and the conviction is spreading that the only solution to the traffic problem is to abolish the traffic. Yet the constructive steps are still neglected. The Luftwaffe presented us with an opportunity to modernise our cities which we could never have created for ourselves, yet in the City of London and the West End new office buildings, hotels, shops and blocks of flats are rising pn the same frontages as the old, and we seem to be labohouslY reconstructing the medheval alleyways Which were already inadequate when the first motor vehicles began panting and wheezing along the roads at the dawn of the century.

And it is time we made an all-out attack on the delays produced by road repairs and excavations. Daily the traffic flow is held up at the barriers, where men chip away with pick and shovel for a few brief hours and then depart. ID other countries road works are carried on day and night without respite until the job is done.

At times like these it is tempting to put the car away, draW the curtains, pull up a chair before the fire, and take down 8 book to recapture the joy of motoring as it once was; to recall the thrill and exultation which .the pioneers felt as they ventured forth along the unfamiliar highways. But •thinp have not changed so very much. On November 14, 1896, the Emancipation Run to Brighton was a procession of foreign cars, because legal restrictions had so far thwarted O. development of a British motor industry. From then on. new' sense of freedom and hope surged through the land, and the motor cars sped along the old' roads, raising clouds of dust and scaring the horses, but also bringing new life to forgotten hamlets, and new prosperity to ancient inns which had languished unvisited since the decline of the stage coach. • • 'Then I come across this passage: ' We have now brought the science of automobilism on the toads up to the point at which it exceeds our necessities. It Is. but a little while ago that no machine existed upon which we could travel on the roads as fast as we wished to travel; now we have machines which can travel faster than is either necessary or desirable or even safe. The next step is to bring the roads into such a condition that high speed can be used with safety to the travellers, and without danger or annoyance for those who still use the roads in the old and simple and pleasant way.'

It was written by Filson Young exactly half a century ago.