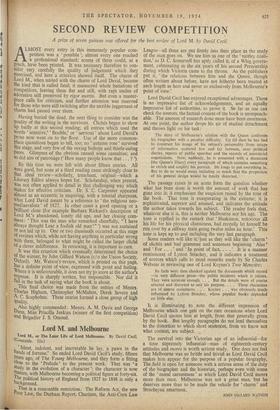 A prize of seven guineas was offered for the best review of Lord M. by David. Cecil.

LMOST every entry in this immensely popular com- petition was a possible '; almost every one reached a professional standard; scores of them could, at a pinch, have been printed. It was necessary therefore to con- sider very carefully the quality of judgement which they exercised, and here a criterion showed itself. The charm of Lord M., when united with the charm of Lord David, became the kind that is called fatal; it massacred whole battalions of competitors, leaving them flat and still, with rapt smiles of adoration still preserved by rigor mortis. But even a master- piece calls for criticism, and further attention was reserved for those who were still twitching after the terrible juggernaut of charm had passed over them.

Having buried the dead, the next thing to consider was the .quality of the writing in the survivors. Clichés began to show up badly at this second reading; all entries which used the words sensitive," flexible,' or nervous ' about Lord David's Prose now went on to the floor. Use of the more common- place quotations began to tell, too; no autumn rose ' survived this stage, and very few of the vexing bishops and thistle-eating Peers. Glimpses of the obvious caused some casualties; and so did airs of patronage (` How many people know that ... ? ').

By this time we were left with about fifteen entries. All were good, but none at a third reading came strikingly close to that ideal review—scholarly, trenchant, original—which a Literary Editor always hopes for. Scholarship, when present. Was not often applied to detail in that challenging way which makes for effective criticism. Dr. S. C. Carpenter appeared almost as an eccentric in enquiring, with a tutorial sharpness, what Lord David meant by a reference to the religious neo- Mediaevalists ' of 1827. In other cases a good opening or a brilliant close (for example Barbara Rickard's description of Lord M.'s abandoned, lonely old age, and her closing com- ment: ' This was the man who remarked cheerfully, " I have always thought Lear a foolish old man!" ') was not sustained or not led up to. One or two dismissals occurred at this stage Of reviews which, while not having anything in particular wrong with them, belonged to what might be called the larger cliché of a clever indifference. In reviewing, it is important to care. It was this criterion which eventually determined the choice of the winner, by John Gillard Watson (c/o the Union Society, Oxford). Mr. Watson's.review, which is printed on this page, has a definite point of view, expressed with point and feeling. Where it is unfavourable, it does not try to score at the author a expense. It is sharply written, but responsible. Nor did it fail in the task of saying what the book.is about. This final choice was made from the entries of Messrs. Charles Higham, Christopher McMahon, Derek Severn and A. C. Scupholme. These entries formed a close group of high quality. Also highly commended: Messrs. A. M. Davis and George Dunn, Miss Priscilla Jenkins (winner of the first competition) and Brigadier J. S. Omond.