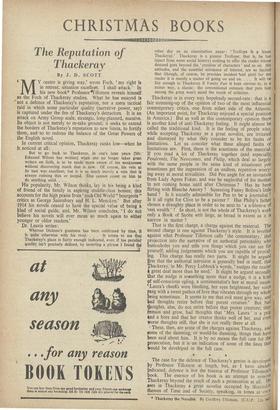 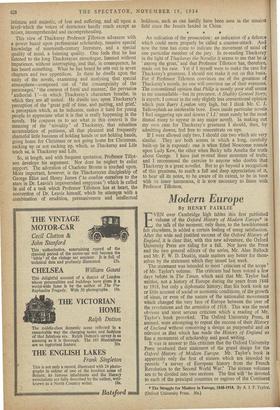 The Reputation of Thackeray

By J. D. SCOTT Y centre is giving way,' wrote Foch, my right is in retreat; situation excellort. I shall attack.' In his new book* Professor *Tillotson reveals himself as the Foch of Thackeray studies. What he has essayed is 'not a defence of Thackeray's reputation, nor a mere tactical raid in which some particular quality (narrative power, say) is captured under the fire of Thackeray's detractors. It is an Itson Army Group scale, strategic, long-planned, massive. Its object is not merely to re-take ground; it seeks to extend the borders of Thackeray's reputation to new limits, to fortify them, and- so to redress the balance of the Great Powers of the English novel.

In current critical opinion, Thackeray ranks low—when he is noticed at all: But to go back to Thackeray, in one's later years NT:- Edmund Wilson has written] when one no longer takes groat writers on faith, is to be made more aware of his weaknesses without discovering much that is new. Of course, his vein itt its best was excellent; but it is so much merely a vein that Is always running thin or insipid. One cannot count on him to

His popularity, Mr. Wilson thinks, lay in his being a kind of friend of the family in aspiring middle-class homes; this accounts for the high praise from such Old World " bourgeois " critics as George Saintsbury and H. L. Meneken.' But after 1914 his novels ceased to have the special value of being it kind of social guide, and, Mr. Wilson concludes, I do not believe his novels will ever mean so much again to either younger or older readers.'

Dr. Leavis writes: Whereas Dickens's greatness has been confirmed by time, It Is quite otherwise with his rival. . . . It seems to me that Thackeray's place is fairly enough indicated, even If his pecullat quality isn't precisely defined, by inverting a phrase I found other day on an examination paper: ' Trollope is a lesser Thackeray.' Thackeray is a greater Trollope; that is, he has (apart from some social history) nothing to offer the reader whose demand goes beyond the ' creation of characters ' and so on. His attitudes, and the essential substance of interest, are so limited that (though, of course, he provides incident land plot) for the reader it is merely a matter of going on and on. . . . It will he fair enough to Thackeray if Vanity Fair is kept current as, in a minor way, a classic: the conventional estimate that puts him among the great won't stand the touch of criticism.

Thackeray is in every way hopelessly second-rate: that is a fair summing-up of the opinion of two of the most influential contemporary critics, one from either side of the Atlantic. (An important point, for Thackeray enjoyed a special position in America.) But as well as this contemporary opinion there is another kind of anti-Thackeray feeling. It might almost be called the traditional kind. It is the feeling of people who, while accepting Thackeray as a great novelist, are irritated and dismayed by what they consider to be his faults or limitations. Let us consider what these alleged faults or limitations are. First, there is the scantiness of the material. If you read a lot of Thackeray together (and especially, Pendennis, The-Newcomes, and Philip, which deal so largely with the same people in the same kind of situations) you sometimes get the impression of an endless, repetitive worry ing away at moral trivialities. Did Pen angle for an invitation from Lady Agnes Foker, and was he neglectful of his mother in not coming home until after Christmas ? Has he been flirting with Blanche Amory ? Squeezing Fanny Bolton's little band ? Is it socially admissible for Pen to be a journalist 7 ; Is it all right for Clive to be a painter ? Has Philip's father chosen a draughty place in order to be next to ' a n-blcm-n of vast wealth' ? In short, is not the whole of Thackeray's work only a Book of Snobs writ large, as broad in extent as it iS narrow in matter ?

That is the first charge, a charge against the material. The second charge is one against Thackeray's style. It is levelled against what Professor Tillotson calls the commentary,' that projection into the narrative of an authorial personality who buttonholes you and tells you things which you can see for yourself, adding judgements which you are capable of provid- ing. This charge has really two parts. It might be argued thrst that the authorial intrusion is generally bad in itself, that ackeray, in Mr. Percy Lubbock's words, 4 nudges the reader great deal more than he need.' It might be argued secondlY, that the nudge is something more than a nudge, it is a kind pf self-conscious ogling, a sentimentalist's leer at moral issues. Laura's cheek's were blushing, her eyes brightened, her voice bng with a sweet pathos of love that vibrates through my whole eing sometimes. It seems to me that evil must give way, and. bad thoughts retire before that purest creature.' But bad thoughts, alas, do not retire before that purest creature; theY, femain and grow, bad thoughts that ' Mrs. Laura ' is a prig Ind a bore and that her creator thinks well of her, and oven worse thoughts still, that she is not really there at all. These, then, are some of the charges against Thackeray. and some of the damning, or would-be damning, things that have been said about him. It is by no means the full case for the prosecution, but it is an indication of some of the lines that would be developed in the full case.

The case for the defence of Thackeray's genius is developed Professor Tillotson at length, but, as I have already

dicated, defence is not the essence of Professor Tillotson's ook. The essence of his book is an attempt to remove Thackeray beyond the reach of such a prosecution at all. He sees in Thackeray a great novelist occupied by illimitable themes of Time and of Society, speaking, in tones at 00° ,..

• Thackeray the Novelist. By Geoffrey Tillotson. (C.U.P. 22s. 6Ai intimate and majestic, of loss and suffering, and all upon a levelrwhich the voices of detractors hardly reach except as noises, incomprehended and incomprehending.

This view of Thackeray Professor Tillotson advances with a power based upon professional scholarship, massive special knowledge of nineteenth-century literature, and a special quality of mind, a listening quality. One feels that he has listened to the long Thackerayan monologue, listened without impatience, without interrupting, and that, in consequence, he has heard something. What he has heard he sets out in seven chapters and two appendices. In them he dwells upon the unity of the novels, examining and analysing that special atmosphere—composed out of the consanguinity of the personages,' the oneness of forth and manner,' the pervasive ` authorial I '—in which . Thackeray's characters breathe, in which they are all united. He dwells too, upon Thackeray's perception of the ` great gulf of time, and parting, and grief,' a perception which, as he indicates, makes it hard for young people to appreciate what it is that is really happening in the novels. He conjures us to see what in this context is the meaning of the `triviality' of Thackeray, that relentless accumulation of pettiness, all that pleasant and frequently shameful little business of holding hands or not holding hands, going home for Christmas or not going home for Christmas, sucking up or not sucking up, which, as Thackeray and Life teach us, is Thackeray and Life.

So, at length, and with frequent quotation, Professor Tillot- son develops his argument. Nor does he neglect to enlist support. The adoration of Charlotte Bronte is touched upon. More important, however, is the Thackerayan discipleship of George Eliot and Henry James (` to confine ourselves to the stars in Dr. Leavis's impoverished empyrean ') which is called in aid of a task which Professor Tillotson has at heart, the conversion of Dr. Leavis himself, which he attempts with a combination of erudition, persuasiveness and intellectual boldness, such as can hardly have been seen in the mission field since the Jesuits landed in China.

* * * An indication of the prosecution : an indication of a defence which could more properly be called a counter-attack. And now the time has come to indicate the movement of mind of one particular member of the jury. In re-reading Thackeray in the light of Thackeray the Novelist it seems to me that he is ` among the great,' and that Professbr Tillotson has, therefore, made out his case. Yet if I myself were to make the case for Thackeray's greatness, I should not make it out on this basis. For if Professor Tillotson convinces me of the greatness of Thackeray's novels, no one will convince me of their evenness. The conventional opinion that Philip is mostly poor stuff seems to me unassailable—but its precursor, A Shabby Genteel Story, is superb; I concur in the only slightly less conventional opinion which puts Barry Lyndon very high, but I think Mr. C. J. Yeliowplush an intolerable bore. Even inside particular novels I find staggering ups and downs (` J.J.' must surely be the most dismal ninny to appear in any major novel). In making out my own case for Thackeray's greatness I should, then, by admitting downs, feel free to concentrate on ups. If I were allowed only two, I should cite two which are very similar. They are both scenes in which a long, carefully built-up lie is exposed: one is when Ethel Newcome rounds upon Lady Kew, the other when Becky tells Amelia the truth about George. I have just re-read these moments of truth; and I recommend the exercise to anyone who doubts that Thackeray is Cgreat novelist. But to go beyond a recognition of this greatness, to reach a full and deep appreciation_of to hear all its notes, to be aware of its extent, to be in tuna with its inner- harmonies, it is now necessary to listen with Professor Tillotson.