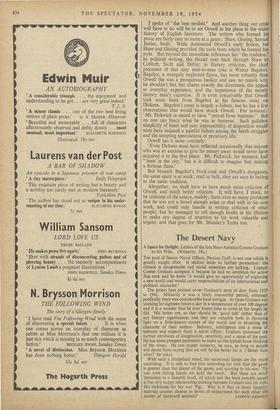 A Space for Delight. Letters of the late Rear-Admiral Cosmo Graham to his Wife. (Witherby. 18s.)

THE post of Senior Naval Officer, Persian Gulf, is not one which is greatly sought after. It seldom leads to further promotion: the climate is disagreeable and social amenities are lacking. Captain Cosmo Graham accepted it because he had no ambition for active flag rank and he knew 'it would give an opportunity of exploring a new world and would carry responsibilities of an international and political character.' The letters here printed cover Graham's term of duty from 1939 to 1942. Militarily, it was a fairly uneventful period, although politically there was considerable local intrigue. At times Graham was working for eighteen hours a day in a temperature of over 100 degrees and it is a wonder that he ever found time to write at the length he did. His letters are, as they should be, 'good talk' rather than of any literary significance; and they are valuable both in throwing light on a little-known corner of the world and in revealing the character of their author. Industry, intelligence and a sense of humour one expects from a naval officer: Graham possessed the further attributes of imagination, sensibility and a sense of the past. He has some pungent comments to make on the typical loose thinking of the times. He can accept austerity, he says, so long as people will desist from saying that we will be the better for it ('Better than what?' he asks).

With such a disciplined mind, his occasional lapses are the more surprising. It is odd to find him reminding his wife that the game is greater than the player of the game, and quoting to his son: `To you with failing hands we hold the torch.' But these are small blemishes in a likeable book, of which not the least notable aspect is the very happy relationship existing between Graham and his wife. His nickname for her was 'Pig.' Why is it that so many happily- married couples choose as terms of endearment for each other the