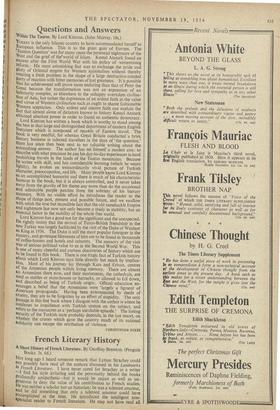 Within The Taurus. By Lord Kinross. (John Murray. 18s.) TURKEY is the only Islamic country to have accommodated herself to European influence. This is to the great gain of Europe. The 'Eastern Question' was for many years the perennial nightmare of the West and the grief of th(world of Islam. Kemal Ataturk found an answer after the First World War with his policy of westernising reform. His most astonishing feat was to exchange the pride and glory of Oriental empire for Western nationalism without thereby creating a fresh problem in the shape of a large destructive-minded Party of reaction with bitter memories of lost greatness. It is possible that his achievement will prove more enduring than that of Peter the Great because the transformation was not an expression of an Inferiority complex, as elsewhere in the unhappy overtaken civilisa-

on of Asia, but rather the expression of an ardent faith in the value and virtue of Western civilisation such as ought to shame fashionable Western scepticism. Only ardent and sincere faith can explain the act that almost alone of dictators known to history Kemal Ataturk obtained absolute power in order to found an authentic democracy.

Lord Kinross has written a book which is worthy to stand among the best in that large and distinguished department of modern English literature which is composed_ of records of Eastern travel. The book is very needful, for whereas Great Britain conducted 'a brisk literary business in talented travellers in the days of 'the question,' there has since then been next to no valuable writing about the astonishing answer. The author has set himself a modest aim: to describe with what precision he can his day-to-day experiences in hard unshirking travels in the lands of the Taurus mountains. Because he writes with skill, and has considerable learning (which he wears lightly), he evokes an extraordinarily vivid picture of Turkish Character, preoccupation, and life. Many people know Lord Kinross as an accomplished humorist and there is much of his characteristic humour in the book, but it is always controlled, and it never takes away from the gravity of his theme any more than do the occasional and admirable purple patches from the sobriety of his literary manners. With no visible effort he introduces the reader to the Shape of things past, present and possible future, and we swallow with relish the true but incredible fact that the old ramshackle Empire and nightmare has now not only become a study in stability, but an essential factor in the stability of the whole free world.

Lord Kinross has a good eye for the significant and the unexpected. He rightly insists that the revival of Turco-British friendship in the new Turkey was largely facilitated by the visit of the Duke of Windsor as King in 1936. The Duke is still the most popular foreigner in the country, and grotesque likenesses of him are to be found in thousands of coffee-houses and hotels and cabarets. The memory of the visit was of serious political value to us in the Second World War. This Is one of many cheerful and curious discoveries of history which are to be found in this book. There is one tragic fact of Turkish history about which Lord Kinross says little directly but much by implica- tion. Most of his journey lay through Kars and Erivan, centres of the Armenian people within living memory. There are almost eo Armenians there now, and their monuments, the cathedrals, are used as stables or store-houses or barracks, .or allowed to fall down, and described as being of Turkish origin. Official education en- courages a belief that the Armenians were 'largely a figment of American propaganda.' Having been exterminated by deeds of cruelty, they are to be forgotten by an effort of stupidity. The only Passage in this fine book where 1 disagree with the author is where he confesses to impatience with Turkish unease on the subject, and refers to the massacres as a 'perhaps inevitable episode.' The lasting security of the Turkish state probably depends, in the last resort, on Whether the crimes which gave the country much of its national solidarity can escape the retribution of violence.