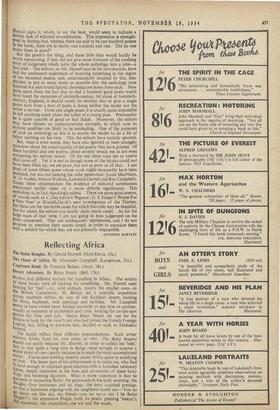 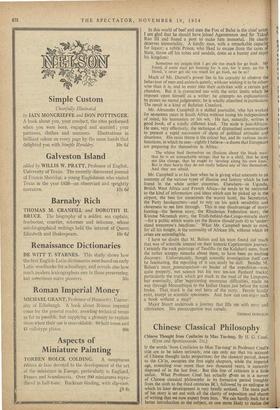 PEOPLE find different excuses for travelling in Africa. The writers Of these books were all looking for something. Mr. Durrell went looking for 'beef'—i.e., wild animals, mainly the smaller ones—in the British Cameroons. M. Balsan led a scientific expedition across southern Africa, by way of the Kalahari desert, looking for flints, bushmen, rock paintings and suchlike. Mr. Campbell seems to have visited most African countries at one time or another, Usually at moments of excitement and crisis, looking for on-the-spot stories for Time and Life. Major Brian Stuart set out for the ilhara to look for the vicar's son who had joined the French Foreign egion; but, failing to extricate him, decided to walk to Timbuktu instead. The books reflect these different preoccupations. Each writer inirrors Africa from his own point of view. The Bafut Beagles stands out partly because Mr. Durrell, in order to collect his 'beef,' had to stay quite a long time in Bafiet—long' enough to acquire a stable point of view: partly because he is much the most accomplished Writer. 1 have read nothing recently about Africa quite so satisfying or true. The lesser part of his achievement is 10 make me, who find Rt. deeply hard enough to maintain good relations with a harmless necessary kitten, dee- y interested in the lives and adventures of these hairy frogs and booming stsuirrels. What is more important is that he tucceeds in recreating Bafut: the grasslands in the early morning; the eagles (four huntsmen and six dogs: the term acquired prestige, to that a huntsman arguing with his neighbour could say—' You no to shout me like dat, ma. friend—you no savvy dat I be Bafut

the the expressive Pidgin (with its poetic greeting 'Iseeya'); L'e mammies; the councillors; the wit and the music.

In this world of beef and men the Fon of Bafut is the chief actor, I am glad that he should have joined Agamemnon and Sir Tukojl Rao 111 and found a poet to make him immortal. He clearly deserves immortality. A kindly man, with a remarkable capacity for liquor; a subtle Prince, who liked to escape from the cares of State, throw off his robes and sandals, dress as a hunter and enjoy his kingdom: Sometime my people link I get ole too much for go bush. MY friend, if some man get hunting for 'e eye, for 'e nose, an for 'd blood, 'e never get ole too much for go bush, no be so?

Much of Mr. Durrell's power lies in his capacity to observe the behaviour of men and animals quietly, without wishing it to be other- wise than it is, and to enter into their activities with a certain gay abandon. But it is connected too with the strict limits which he imposes upon himself as a writer: he attempts no explanations; he passes no moral judgements; he is wholly absorbed in particulars. The result is a kind of Bafutian Cranford.

Mr. Alexander Campbell is a skilled journalist, who has worked for seventeen years in South Africa without losing his independence of mind, his humanism or his wit. He has, naturally, written a good book, of a totally difkrent kind. The scale is pan-African. He uses, very effectively, the technique of dramatised conversations to present a rapid succession of shots of political attitudes and situations. His main theme is the colour bar, and its various mani- festations, in which he sees—rightly 1 believe—a doom that Europeans are preparing for themselves in Africa:

The whites feed themselves on illusions about the black man: that he is an unteachable savage, that he is a child, that he does not like change, that he ought to 'develop along his own lines.' But in their hearts they do not really believe any of this themselves. And they are afraid.

Mr. Campbell is at his best when he is giving what amounts to an anatomy of the various types of illusion and fantasy which he has found in the white settler countries. Elsewhere—in Uganda, British West Africa and French Africa—he tends to be restricted to the kind of information and ideas which can be picked up in the airport, the best (or sometimes the worst) hotel, the Secretariat, the Party headquarters—and to rely on his quick sensibility and cleverness to see him through. This is one disadvantage of story- hunting—the Seretse story, the Rhodesian Federation story, the Kwame Nkrumah story, the Truth-behind-the-Congo-miracle story —for a public which wants (as the Boston Herald puts it) to 'under- stand tomorrow's headlines.' What Mr. Campbell tends to miss, for all his insight, is the normality of African life, without which its crises are unintelligible.

I have no doubt that M. Balsan and his team found out much that was of scientific interest on their historic Capricornian journey. Certainly the rock paintings of Tsodillo (in the Kalahari) seem, from the rather scrappy remarks about them, to have been an exciting discovery. Unfortunately, though scientific investigation itself can be fascinating, the reporting of it can. easily be dull. Besides M. Balsan's main preoccupation—as leader of the expedition—was, quite properly, not science but his two ten-ton Panhard trucks; particularly the truck which got stuck in the mud of the Limpopo, but eventually, after bkercoming enormous difficultiei, made its way through Mozambique to the Indian Ocean just before the rains broke. That truck is the real hero of the story. People hardly exist, except as scientific specimens. And how can one enjoy such a book without a map?

Major Stuart undertook a journey that fills me with envy and admiration. His preoccupation was camels.