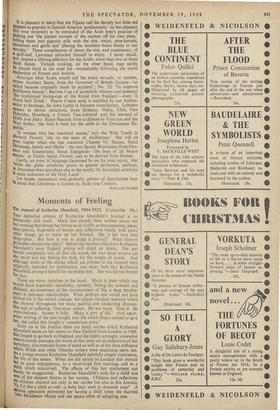 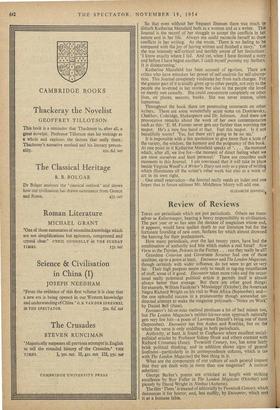 Tins definitive edition of Katherine Mansfield's Journal is an Immensely rich book. Much has already been written about her but nothing that brings her before us so vividly as the comments, jokes, descriptions, fragments of stories and reflections which, with many. other things, go to make up her Journal. She is her own best biographer. But how is one to judge a journal? What literary rinciples should one apply? Before the sternest critical eye Katherine Nansfield's most flippant jotting will stand up firmly. She put herself completely into all that she wrote, she was never evasive yet the never lost her feeling for style, for the weight of words, And although some of the entries which are printed in the Journal were originally intended for publication, one never feels that Katherine Mansfield arranged herself for the public eye. She was far too honest for that There are many surprises in the book. Much is there which one Would have expected—sensibility, subtlety, feeling for animals and children, an awareness of the transitoriness of life, a deep involve- Meat in personal relationships. What perhaps one would not have looked for is the stoical courage, the almost classical restraint which e showed throughout her many painful and weakening illnesses. She said of suffering, 'One must submit. Do not resist. Take it. Be Overwhelmed. Accept it fully. Make it part of life.' And again, When writing of the new insight into life which illness seemed to give her, she called this insight a 'consolation prize.' ...Early on in the Journal there are many entries which Katherine Mansfield made on her return to New Zealand from London in 1906. She longed to go back to England, and the highly-wrought, somewhat Me_ lodramatic passages she wrote at that time are an indication of her Int_bulent, discontented frame of mind as well as of the deep influence 'hush Wilde and other Nineties writers were exercising upon her. 413 a young woman Katherine Mansfield painfully sought experience, led life of the senses. When she did return to. London this pursuit leel to great unhappiness, to a short-lived first marriage and to a child which miscarried. The effects of this last misfortune can hardly be exaggerated. Katherine Mansfield's wish for a child was one of the deepest desires in her nature. Children and reflections PI, children abound not only in her stories but also in this Journal. u, I'd like a child as well—a baby boy: mats je demande trop!' A lesjous operation prevented her having a child when she married eon Middleton Murry and she spoke often of adopting ono. So that even without her frequent illnesses there was much disturb Katherine Mansfield both as a woman and as a writer. Journal is the record of her struggle to accept the conflicts in h nature and in her life. Always she could reconcile herself to th conflicts in her writing. As she wrote, 'There is no feeling to compared with the joy of having written and finished a story.' Y she was intensely self-critical and terribly aware of her limitations: '1 know exactly where I fail. And yet, when 1 have finished a story and before I have begun another, I catch myself preening my feathers. It is disheartening.'

Katherine Mansfield has been accused of egotism. There are critics who have mistaken her power of self-analysis for self-absorp- tion. This Journal completely vindicates her from such charges. For the greater part of it is totally given up to other people, not only to the people she invented in her stories but also to the people she loved or merely met casually. She could concentrate completely on other lives, on places, seasons, books. She was never intense, often humorous.

Throughout the book there are penetrating comments on other writers. There are some wonderfully acute notes on Dostoievsky, Chekhov, Coleridge, Shakespeare and Dr. Johnson. And there are provocative remarks about the work of her own contemporaries such as this: 'E. M. Forster never gets any further than warming the teapot. He's a rare fine hand at that. Feel this teapot. Is it not beautifully warm? "Yes, but there ain't going to be no tea.' It is impossible with a few quotations to give more than a taste of the variety, the wisdom, the humour and the poignancy of this book. At one point in it Katherine Mansfield speaks of . .. the moment which, after all, we live for—the moment of direct feeling when wo are most ourselves and least personal.' There are countless such moments in this Journal. I am convinced that it will take its place beside Virginia Woolf's A Writer's Diary not only as a piece of writing which illuminates all the writer's other work but also as a work of art in its own right.

One small reservation—the Journal really needs an index and one hopes that in future editions Mr. Middleton Murry will add one.