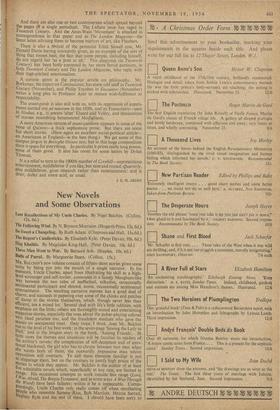 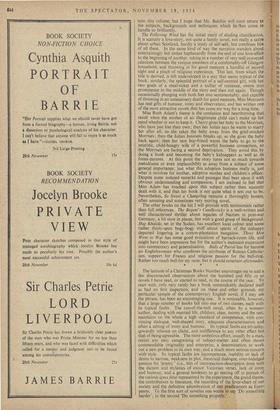 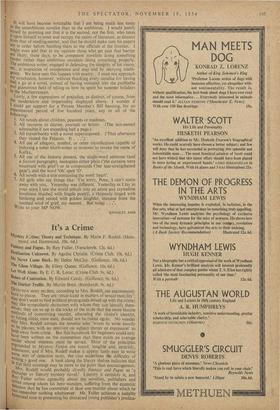 miss this volume, but I hope that Mr. Baichin will soon return to the subjects, backgrounds and techniques which he elms come to handle so brilliantly.

The Following Wind has the initial merit of eluding classification. It is scarcely a love-story, not quite a family novel, not really a satire about urban Scotland, hardly a study of self-will, but combines bits of all these. In the same kind of way the narrative wanders about entertainingly but rather haphazardly from the end of one love-affair to the beginning of another, taking in a number of very well conveyed relations between the various members of a coinfortably-Off Glasgow household, and throwing in for good measure a handful of second sight and a pinch of religious experience. This last, from which the title is derived, is left undeveloped in a way that seems typical of the book; similarly, the splendid portrait of a self-centred girl, with her two goals of a meal-ticket and a snifter of romance, swims into prominence in the middle of the story and then out again. Though occasionally plunging with both feet into sentimentality, and capable of throwing in an unnecessary death for good measure, Miss Morrison has real gifts of humour, irony and observation, and has written one of the most attractive novels that has come my way for a long time. Miss Ruth Adam's theme is the confusion and heartburning that result when the mother of an illegitimate child can't make up her mind whether or not to keep it. Cherry gives her baby to the Morrises, who have just lost their own; then her Julian says he wants to marry, her after all, so she takes the baby away from the grief-stricken Morrises; then the Julian business breaks up, so she gives the baby back again; then her new, bqy-friend wants the baby to go to the neurotic, child-hungry wife of a powerful business connection, so the Mortises are facing a second deprivation. They avoid this by doing a bunk and becoming the baby's kidnappers as well as its foster-parents. At this point the story turns not so much towards melodrama or even implausibility as away from a subject of some general, importance: just what this adoption business really is, just what it involves for mother, adoptive mother and children's officer. Despite some isolated remarks and passages that bear upon it with obvious understanding and compassion, I am inclined to feel that Miss Adam has touched upon this subject rather than squarely dealt with it, and that her book is not quite what it sets out to be. Nevertheless, So Sweet a Changeling remains a thoroughly honest, often amusing and sometimes very moving novel. The other books on the list I will provide with testimonials rather than full references. The Regent's Candlesticks is a well-written and well characterised thriller about legacies of Nazism in post-war Germany, a bit slow in places, but with a good grasp of background. Hag. Khalida, set in the Sudan, has excellent local colour and some rather thinly-spun bogy-bogy stuff about spirits of the unhappy departed lingering in a cotton-plantation bungalow. Three Men Went to Wgr has some goo'd evocations of barrack-room life, and might have been impressive but for the author's incessant excursions into commentary and generalisation. Bulls of Parral has for heroine an Englishwoman who combines the attributes of Roman Catholic- ism, support for Franco and religiose passion for the bull-ring. Rather too much bull for my taste, but it should entertain aficionados. * *

The latitude of a Christmas Books Number encourages me to add a few disconnected observations about the hundred and fifty or so novels I have read, or started to read, in the course of the year. To start with, only very rarely has a book unmistakably declared itself as bad on first inspection, and on these and other grounds my particular sample of the contemporary English novel, if I may use the phrase, has been an encouraging one. It is noticeable, however, that a large number of books fall into one of two classes, each with its typical faults. The run-of-the-mill novel, often by a woman- author, dealing with married life, children, class, money and the rest, maintains on the whole a high standard of competence, with con- vincing dialogue, well-shaped story, adequate characterisation and often a salting of irony and humour. Its typical. faults are triviality, gpwardly reliance on cliche, and indifference to any other effect but that of being agreeable. The more ambitious effort, usually by a man, resists any easy categorising of subject-matter and often shows commendable originality and enterprise, a determination to work out a new problem in its own way, and a Much more serious concern with style. Its typical faults are incompetence, inability or lack of desire to narrate, weakness in plot, theatrical dialogue, over-indulged passion for 'poetry ' (i.e., bits of introspection-description done with the diction and stylistics of minor Victorian verse), lack of irony and humour, and a general tendency to go tearing off in pursuit of the variotis igneslatui represented by the experiment, the grand theme, the contribution to literature, the recording of the fever-chart of our society and the definitive adumbration of our predicament as Euro- peans. To the first sort of novelist one wants to say 'Do something harder'; to the second 'Do something properly.' It will have become noticeable that I am being much less nasty to the unambitious novelist than to the ambitious. I would justify rnYself by pointing out that it is the second, not the first, who takes it upon himself to enter and occupy the realm of literature, as distinct from that of' reading-matter, and that he should make sure his papers are in order before handing them to the officials at the frontier. I might even add that in my opinion those who get past that barrier are likely, these days, to be competent novelists doing somethihg harder rather than ambitious novelists doing something properly. The ambitious writer, engaged in defending the integrity of his vision, ete., is suspicious of competence and may end by decrying intelli- gence. We have seen this happen with poetry. I must not approach 111, Y conclusion, however, without thanking every novelist for having had a go at a novel, instead of having ventured into the profitable and glamorous field of telling us how he spent his summer holidays in the Mediterranean.

Lastly, a few expressions of prejudice, as distinct, of course, from the moderation and impartiality displayed above. I wonder if I could get support for a Private Member's Bill banning, for an experimental period of five hundred years, any or all of the following: 1. All novels about children, peasants or madmen. 2. All recourse to diaries, journals or letters. (The last-named admissible if not exceeding half a page.) 3. All travel-books with a novel superimposed. • (`That afternoon they visited the Palazzo. It . . .'.)

4. All use of allegory, symbol, or other mystification capable of inducing a sober blurb-writer or reviewer to invoke the name of Kafka.

All use of the historic present, the single-word sentence (and a Artiori paragraph), neologism either plain ('the curtains were susurrant with grief') or in compounds ('her tear-strengthened gaze'), and the word 'Oh' spelt '0'.

6. All novels with a title containing the word 'heart'. 7. All girls who say things like: 'I'm sorry, Peter, I can't come away with you. Yesterday was different. Yesterday as I lay in your arms I saw the world rebuilt into an azure and crystalline loveliness touched with fragile poetry, a rhapsody tinged with birdsong and veined with golden laughter, immune from the toothed wind of grief, my dearest. But today . . Write to your MP NOW.