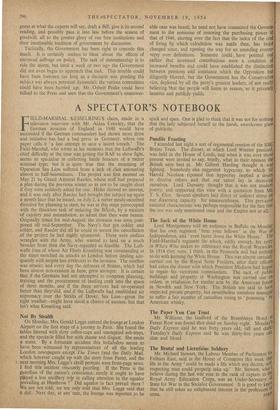 FIELD-MARSHAL KESSELRING'S claim, made in a television interview with Mr. Aidan Crawley, that the German invasion of England in 1940 would have succeeded if the German commanders had shown more drive and initiative has had a bad press in Germany, where one paper calls it ' a late attempt to save a laurel wreath.' The Field-Marshal, who wrote in his memoirs that the Luftwaffe's chief difficulty at the time was getting the RAF to show fight, seems to specialise in collecting battle honours of a rather notional type; but it is quite true that the mounting of Operation Sea Lion suffered from a lack of elan amounting almost to half-heartedness. The project was first mooted on May 21 by Grand Admiral Raeder. whose staff had prepared a plan during the previous winter so as not to be caught short if they were suddenly asked for one. Hitler showed no interest, and it was only after Raeder had brought the subject up again a month later that he•issued, on July 2, a rather mealy-mouthed directive for planning to start; he was at this stage preoccupied with the thankless task of inducing the British, by a mixture of cajolery and intimidation, to admit that they were beaten. Originally timed for mid-August, the invasion was soon post- poned till mid-September. The Navy's feet got colder and colder, and Raeder did all he could to secure the cancellation of the project he had rashly sponsored. There were endless wrangles with the Army, who wanted to land on a much broader front than the Navy regarded as feasible. The Luft- waffe (one of whose Air Fleets Kesselring was commanding at the time) switched its attacks to London before dealing ade- quately with targets less irrelevant to the invasion. The weather was erratic; and every day the defences of Britain, which had been almost non-existent in June, grew stronger. It is certain that if the Germans had not attempted to compress planning, training and the procurement of landing craft into the space of three months, and if the three services had co-operated better than they did, and if the Luftwaffe had established air supremacy over the Straits of Dover, Sea Lion—given the right weather--might have stood a chance of success; but that isn't what Kesselring said.